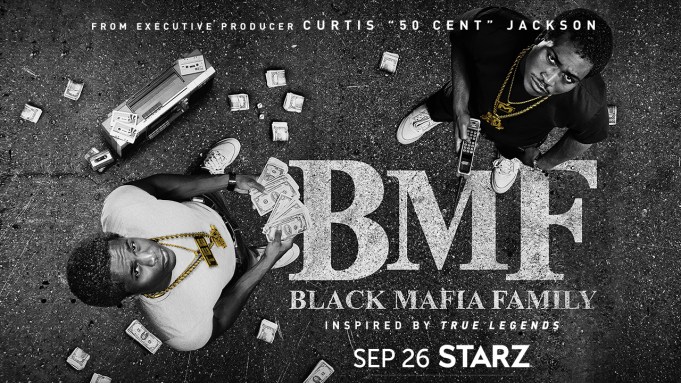 Kicking off its newly dropped trailer with the slate “Detroit, 1980-Something,” the 50 Cent executive produced BMF today reveled its ambition to take viewers on “a journey beyond our wildest imaginations” – check out the new Black Mafia Family trailer above.

Part of that journey involved getting Eminem to join the cast of the Starz series.

“Really, it was Randy’s idea to get Marshall to come out to play White Boy Rick,” the BMF EP said at the series’ Thursday’s TCA panel with a shout out to showrunner Randy Huggins. “I wasn’t sure I could make it happen,” the platinum rapper added of his old pal Marshall Mathers III’s participation, which was unveiled earlier this week.

Today’s trailer and art follows on the well timed news that Detroit-native and 50 Cent mentor Eminem will make an appearance in BMF as the fabled drug trade teen who turned undercover FBI informant back in the day. Besides videos and the odd late night or skit cameo, the role will be the first time the rapper will be on-screen significantly since 2002’s Oscar winning 8 Mile.

Eminem will show up in the 50 Cent directed seventh episode of BMF’s eight-episode first season.

To take the 48-year old “Lose Yourself” rapper back to adolescence, a little bit of Robert De Niro was used, 50 said.

“We used the same technology that Martin Scorsese used in The Irishman to get him back to his teenage years as White Boy Rick,” the EP asserted. “It adds a little splash” to have a marquee name like Eminem in a series that is already full of hip hop icons, the constantly promotional and marketing savvy 50 added.

Picking up where the teaser trailer of last month only hinted, the latest look at the September 26 debuting Starz series based on real life Motor City drug kingpins Demetrius “Big Meech” Flenory and Terry “Southwest T” Flenory didn’t have any Eminem in it, despite all the hype this week.

However, the trailer was full of NYC’s Run DMC on the soundtrack and co-star and hip hip icon in his own right Snoop Dogg in fine form. “The good Lord thanks you for that benevolent offering brother,” says the D-O-double G’s “Pastor Swift,” the fur coated so-called spiritual advisor to the Flenorys, in the trailer as he pockets a hefty pay-off.

“There is a huge separation between entertainment and reality and the people who can’t separate that should be in a mental institution,” said 50 today when accused on pushing the mythology of the drug trade yet again in BMF

“At the core, it is a series about family,” asserted Huggins, who pointed out that for young Black men like the Flenorys hustling “was their only way out.”

BMF is produced by Lionsgate TV and 50’s G-Unit Film and Television. The series is EP’d by 50, and showrunner, Huggins, as well, Empire vet Tasha Smith is set to direct multiple episodes and EP. Terri Kopp, Anthony Wilson and Anne Clements are serving as executive producers too.