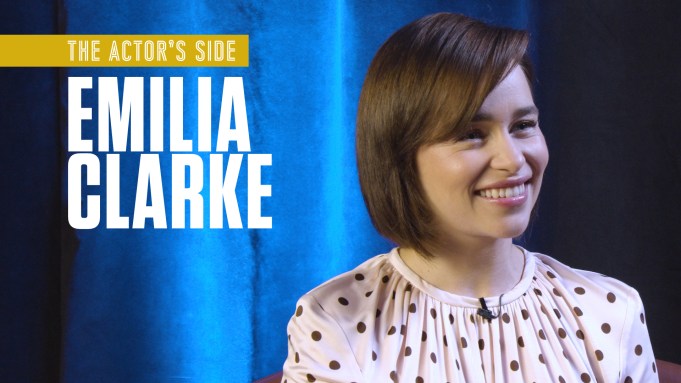 Emilia Isobel Euphemia Rose Clarke is the subject of this week’s episode of my Deadline video interview series The Actor’s Side. You probably know her better with her shortened name, Emilia Clarke, but as she tells me she can relate with the number of names her character Daenerys Targaryen has also been known by on the mega-hit Game of Thrones. There has been Khalessi of the Great Grass Sea, Lady of Dragonstone, Breaker of Chains and more, but as she says her sentimental fave is Mother of Dragons, and that is how I, and likely millions of GoT fans, will choose to remember her character with fondness.

Clarke has received three Emmy nominations to date and almost certainly will gather a fourth for this final season of the epic, which has been breaking HBO series ratings records and will all come to an end on Sunday. The feverish interest in the show is a testament to the old-fashioned weekly unveiling of episodes rather than streaming — proving there is something in the traditional way we previously saw blockbuster TV shows slowly march to their conclusions. Clarke points out the advantage of the attendant publicity in bringing new viewers to the show even just as it is ending. She also talks about how much she will miss doing GoT, and how different it is to watch as a viewer than it was in making it.

Clarke discusses the wide-ranging arc of her Daenerys from meek to all-powerful over the course of eight seasons and how, with this sort of role, “you have to grow some balls.” She also tells me about her real-life health scare with two life-changing brain aneurysms that altered the way she would play this mother of all dragons in years to come.

Check out our conversation in the video above. To see past The Actor’s Side episodes, click here.