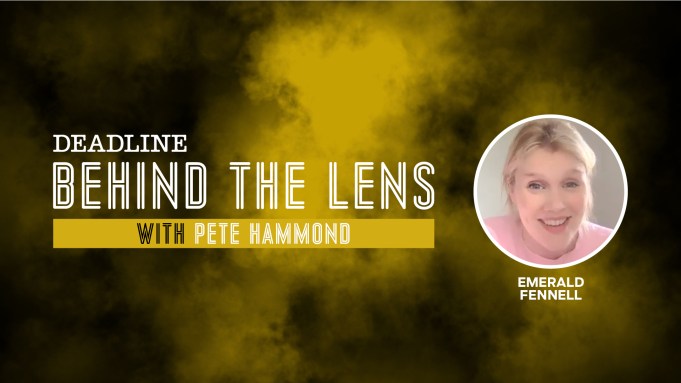 I told Emerald Fennell that her feature film debut as writer and director, Promising Young Woman, is simply burning a hole through this awards season, and deservedly so. Just hours before we talked for this week’s episode of my Deadline video series Behind the Lens she had won the Best Original Screenplay award from the WGA, which only added to her awards haul so far this season that includes a DGA nomination, and which continues with a historic three personal Oscar nominations as producer, writer and director. We talk about how that feat might have been a record for a woman except here in the same year Nomadland’s Chloé Zhao actually picked up four individual nominations.

Fennell discusses the brightening picture for women behind the camera, why she has always wanted to be a director, her unique writing process of creating a script all in her head before setting it to paper, the diversity of films coming out this year, the twists and turns of Promising Young Woman and the “seduction culture” that inspired her to make it. She also says that it is true she once told her parents, as a little girl, that she wanted to grow up and tell stories of murder and move to America. “I guess it is true that all my creative writing has been demented,” she laughed.

She said making a short called Careful How You Go and getting accepted into Sundance was a key to being able to get financing for PYW, and making it her own way in just 23 days. Fennell says that Covid restrictions permitting, she is hoping to be able to travel from London to L.A. to be at the Oscars in person, but is terrified the rules will change before she gets to board a plane. Oh, and she also talks about her acting career, specifically her current role as part of the Royal Family in The Crown in which she plays Camilla Parker Bowles. Her take on being in that iconic show? “It really shows how punishing it can be to live under that kind of scrutiny.”

Fennell is getting a lot of scrutiny herself these days and Promising Young Woman is just the start of it all.

To watch our conversation and go Behind the Lens with Fennell, check out the video above.