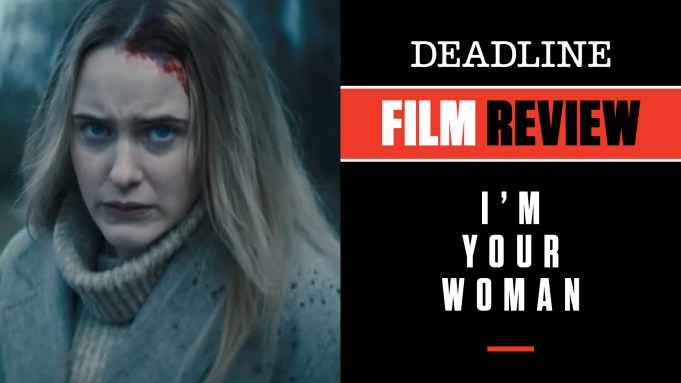 Right from the opening images of a unrecognizable, long-haired, darkly blond Rachel Brosnahan laying on a lounge chair with oversized dark glasses as we hear Bobbie Gentry’s lilting ’70s song, “I Wouldn’t Be Surprised” play on the soundtrack, I have to admit that tonight’s AFI Fest opener I’m Your Woman had me at hello. And the voice-over describing how the characters Eddie and Jean “met and fell in love, then married and got a house, then tried to have a kid and didn’t, and then every morning Eddie kisses Jean goodbye, and every morning Eddie leaves the house, and every morning Jean is alone” sort of gives us a picture of Brosnahan’s suburban housewife before the initial credits are half-over.

Then her reality hits as she does somehow have a crying baby that requires her constant attention. Everyday scenes of domesticity are quite deceptive since it doesn’t take long for this to turn into a ’70s-style violent crime thriller that has been sunkissed with the spirit of a ’40s noir. Taking place in a nondescript town, this is a movie that its director and co-writer (with husband Jordan Horowitz) Julia Hart describes as inspired by the male-driven crime thrillers of the ’70s and, in fact, derives its title from Michael Mann’s 1981 Thief, in a scene where Tuesday Weld tells James Caan, “I’m your woman, and you’re my man.”

It is with that where Hart decided to follow the path of the usually underused female stars of those movies, rather than the man. Make no mistake, this is no Atomic Blonde, centered on a kickass female lead, but rather about what happens to a woman caught up in the bad deeds of her criminal spouse.

In this case that is Eddie (Bill Heck), who one morning announces he won’t be home that night, and as it turns out that is just the beginning of events careening out of control for Jean when her life, and her baby’s, is turned upside down. An associate of Eddie’s turns up during the night, frantically getting her to pack and handing her a bag full of cash with instructions to give $10,000 of it to a guy named Cal, who will contact her with further information. Cal (nicely played by British actor Arinze Kene) does show and takes Jean and baby under his wing until setting her up in a safe house in another otherwise normal-seeming suburban neighborhood.

But why? What has Eddie done? What’s happening here?

When a seemingly sweet neighbor lady (a terrific Marceline Hugot) knocks on the door offering welcoming flowers, we wonder if is she a part of this too. The answer to that comes quickly when, in a thrillingly staged scene, the bad guys come a-calling themselves, and all hell breaks loose. Jean eventually is moved to Cal’s cabin in the woods, where he lives with his father (Frankie Faison), young son and wife Teri (Marsha Stephanie Blake), the latter with a dark past of her own but a comforting and commanding presence for Jean as the two women eventually set out together to get to the bottom of everything, taking matters well into their own hands.

Although buried in genre, Hart’s take is as refreshing as it gets, with the female voices in front of and behind the camera taking control for a change in this kind of bare-knuckled, darkly hypnotic, if lethal, thriller. She and Horowitz (producer of La La Land and The Kids Are Alright)are frequent collaborators with films she has directed including Miss Stevens, Fast Color and Disney+’s Stargirl, but other than the fact those films revolve around key female characters driving the story, this is a complete departure in subject matter. Hart rightly corrects the imbalance between the female side of things in this particular brand of movie but never compromises the tone, only deepening it.

And despite setting it all in the ’70s, it has surprising relevance for today, its diverse cast being a real plus as well. There is also the element of being a mother but finding connection to a child not so easy a task, which makes Jean a complicated person who emerges fully three-dimensional here. Of course, a lot of that is due to Brosnahan, who also produced with Horowitz and takes on a character miles away from Mrs. Maisel but scoring just as triumphantly in a bravura turn. And you have to really give her props for sharing the screen with a baby for much of the running time, a feat she pulls off effortlessly. Blake and the entire supporting cast also are excellent.

The period has been re-created beautifully but with subtlety, and the soundtrack — starting with that gem of a Gentry song and including some well-chosen Aretha Franklin tracks to boot — really adds to the atmosphere. It is the opening-night film of the AFI Fest tonight and will open December 4 in select theaters before launching December 11 on Amazon. Check out my video review with scenes from the movie at the link above.

Do you plan to see I’m Your Woman? Let us know what you think.