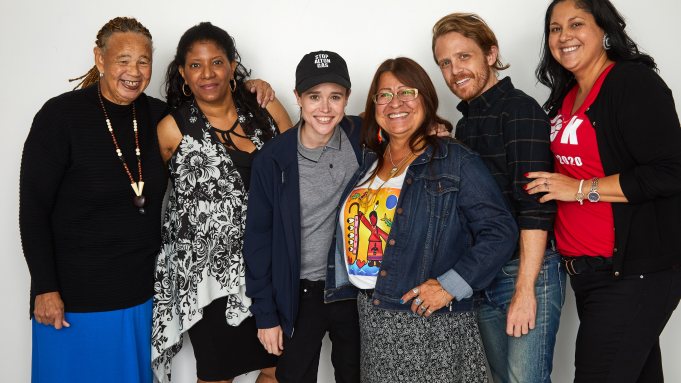 When Ellen Page read a book by Ingrid Waldron highlighting the environmental and social injustices happening in Nova Scotia, Page—who grew up there—felt moved to tweet Waldron. And so began a conversation that would become the documentary There’s Something in the Water.

For Page, this dark underbelly to where she grew up needed to be urgently addressed. Re-teaming with her Gaycation docuseries collaborator Ian Daniel, the pair worked to tell the story of a group of female activists known as ‘the grandmothers’ who battled environmental racism—the pollution of areas populated by minorities—and the breaking of previously agreed treaties.

“It was Ingrid’s connections with a lot of the local activists, and other people’s connections, that enabled us to get in touch with people and start the conversations,” Page said at Deadline’s TIFF studio—and start essentially planning a film shoot. So, it was really this decision, this sense of urgency, because all of these issues are incredibly urgent. In about two weeks, we put an idea, an outline for this film, and what this trip was going to be in Nova Scotia [together], and then there we were, making it.”

Daniel agreed that working with the women activists was vital to production. “Those scenes you’re witnessing are just very raw,” he said, “they’re very powerful, but this is the reality that you’re living in. So, it just clicked like that. Everyone was so gracious to offer their time, and their homes, and their community for us to enter.”

For Louise, one of the key activists featured in the film, this is a fight that she will never give up. “In the beginning,” she said, “when I started working on this specific project to bring my community together to discuss environmental racism, I brought it up in a way that it got picked up by a lot of media, and it went out, And one of my, supposedly, counselors, who was supposed to be working for me in my community, accused me of using the race card. So, I said, ‘This is the beginning of a long fight for me, and I will never stop. You will hear my voice till the day I die. I will have something to say about environmental racism,’ and that’s what it was for me. When I read that, I knew I was in a fight that I couldn’t quit. I had to keep going.”