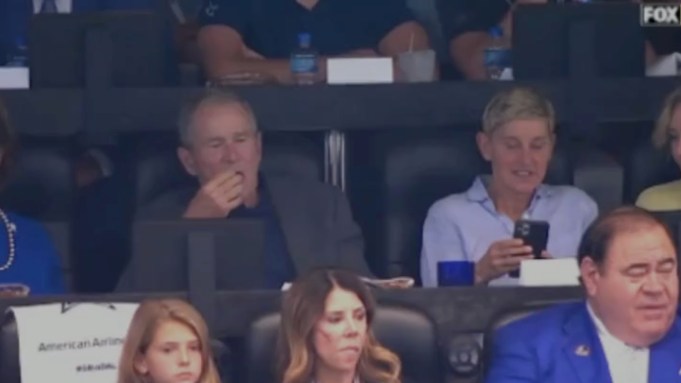 In a rare lambasting on her own Twitter page, Ellen DeGeneres still is getting considerable backlash for that photo of the comedian and former President George W. Bush enjoying last weekend’s Cowboys-Packers game (and, in W’s case, a mouthful of stadium grub).

And the Ellen DeGeneres Show host seems to have only furthered the divisiveness with her jokey, on-screen defense Monday.

The background: DeGeneres and wife Portia de Rossi were invited to the game by Charlotte Jones, daughter of Cowboys owner Jerry Jones. “And we went because we wanted to keep up with the Joneses,” DeGeneres said in what anyone has to concede is a pretty funny line.

Taking their place in the owner’s stadium suite, DeGeneres and de Rossi were seated next to W and wife Laura, with photos of the Odd Quartet going viral. The talk show host showed her own video of the game watchers on her show Monday, setting up the clip by noting that Jerry Jones has “fancy friends, and I don’t mean fancy like Real Housewives fancy…” Her video pans the suite sitters before arriving at a surprising, smiling Bush.

When photos of the pairing went viral Sunday, even some Ellen fans on social media expressed outrage, noting, among other things, Bush’s presidential opposition to marriage equality; the wars in Iraq and Afghanistan; and, more recently, his strong support of then-Supreme Court nominee Brett Kavanaugh.

On Monday’s show, DeGeneres dismissed the criticism, explaining: “Here’s the thing. I’m friends with George Bush. In fact, I’m friends with a lot of people who don’t share the same beliefs that I have.” She then compared the situation to her disapproval of wearing fur but maintaining friendships with some who disagree.

“When I say, ‘Be kind to one another,’ I don’t only mean the people that think the same way that you do,” DeGeneres said. “I mean be kind to everyone.”

“Ellen and George Bush together gives me faith in America again.”
Kudos to @TheEllenShow for saying something so simple that it’s sad it even needs to be said: you can be friends and kind to people with whom you disagree. https://t.co/8Mjd7oFy6a

But if DeGeneres thought she was defusing the situation or convincing everyone, we have some days-old popcorn to sell her.

Said one Twitter commenter, paraphrasing DeGeneres: “‘Look, I’m too rich for his decisions to really affect me.’ Is what this boils down to.”

Responded another: “He’s a war criminal, Ellen. Directly responsible for the murder of 100s of thousands of Iraqis, largely women, children, and the elderly. What’s it like to be this shamelessly desperate for ‘access’ and attention?”

Even some public figures entered the debate, including journalist and activist Glenn Greenwald, who wrote that DeGeneres’ monologue was an attempt to explain “why she was sitting next to the torturer and war criminal…”

"I’m friends with George W. Bush" – @TheEllenShow, explaining why she was sitting next to the torturer and war criminal, laughing it up at a football game, reflecting the prevailing liberal ethos: https://t.co/2s7Jz08W2V

Privilege is Ellen DeGeneres explaining her friendship with George Bush by saying "just because I don’t agree with someone on everything doesn’t mean I’m not gonna be friends with them," as if what they disagree about is who was best dressed at the Emmys or what the best mayo is

Us: “George Bush is a war criminal who is responsible for the deaths of a multitude of brown ppl in foreign lands while killing American soldiers for a fruitless war based on a lie.”

Ellen: “SOMETIMES WE GOTTA REACH ACROSS THE AISLE!”