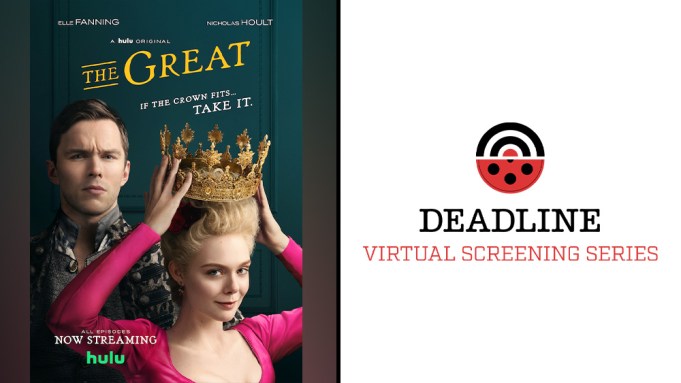 When it came to playing the hijinks of Russian empress visionary Catherine the Great and her buffoon husband Peter III in Hulu and MRC’s period series The Great, Elle Fanning and Nicholas Hoult “threw out the history books.”

More specifically, rather than have their performances become bogged down by all the historical facts, they left that to creator Tony McNamara, who is quickly establishing a flair for melding historical drama with absurdist comedy. Not having to hit the books, allowed Hoult, who worked on McNamara’s Oscar nominated The Favourite (he was nominated for original screenplay) to “mess around”; of sheer delight being Peter III’s physical antics of brawling and sharp Month Python-esque one-liners.

That great chemistry between Fanning’s deadpan and Hoult’s foolish king is chemistry the actress says came about during the six month shoot of The Great, even though it’s the second time the duo have worked together after the 2014 sci-fi western Young Ones.

Says Fanning, on which The Great reps her first time as a TV series EP, “Tony has done so much research on the period and in Catherine and Peter, and used the facts that work specifically for our tone. The real work was humanizing the character, making her a character that that could come to modern audiences and show how she became this feminist icon.”

Watch our clip above from our Tuesday night virtual screening of Hulu’s The Great.

The Great was recently picked up by Hulu for a second season, which McNamara and his writers are currently breaking story on.