Continue to Deadline SKIP AD
You will be redirected back to your article in seconds
Skip to main content
March 31, 2020 4:09pm 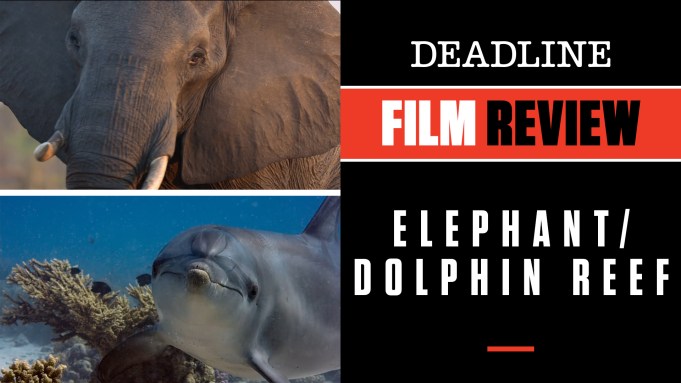 From 2009’s Earth to 2019’s Penguins, with the likes of Oceans, African Cats, Chimpanzee, Monkey Kingdom, Born In China, Bears and so on in between, the decade-old reboot of Walt Disney’s multi-Oscar-winning True-Life Adventures series has been a reliable theatrical staple every April just in time for Earth Day. But with the emergence of Disney+ and the closing of theaters due to coronavirus, we are getting not just one but two new entries under the Disneynature label, Elephant and Dolphin Reef, both premiering Friday on Disney’s new streaming service.

For lovers of beautiful creatures of the decidedly non-human variety, and for families looking for G-rated entertainment the kids haven’t already seen a thousand times, this double billing is a cause for celebration in these dark times. Both films share a common theme of Disneynature docus, that of family sticking together through the most harrowing of circumstances in order to survive the elements. Certainly that is a particularly good message for right now.

Of the pair, Elephant is easily the best and most thrilling to experience I would say, and having seen all the series’ previous entries it’s one of the top efforts to date. You can’t really go wrong with elephants, that most majestic of animals, and the filmmakers know exactly how to give each member of this herd their own distinct personality, instantly recognizable ironically in human terms to which even the youngest viewer can relate. And the movie’s narrator, Meghan Markle (actually billed here as Meghan, Duchess of Sussex) is an ideal guide, telling the story as if she was reading a children’s book but keeping every viewer right on the edge of their seats for this journey.

The plot cooked up by director Mark Linfield and his co-writer David Fowler centers on a herd of elephants led by matriarch Gaia, who at 50 is nearing the end of life and on her last of six sets of teeth, we are told. She has been through this many times, making the annual eight-month trek back and forth through the Kalahari Desert in search of water. Along for the trip, among a few others, is her 40-year-old sister Shanti and her latest offspring Jomo, the caboose of this tribe as it were, always getting into some sort of mischief as he learns the ropes from the elders. Along the way there are encounters with zebras, hyenas, an amusing diversion with alligators, and ultimately the scariest of all for them: lions.

The filmmaking team obviously situated their cameras over months, even years to get the kind of remarkable footage that could then be turned into the story they wanted to create. It is a world shown without human interference, one that doesn’t dwell on depressing statistics about the lessening numbers of these proud animals but instead focuses instead on their ability to still be around to roam this particular part of the earth, starting at the Okavango Delta in Botswana, and living to tell the tale. It is certainly not a nature docu for purists to be sure, but taken on its own terms — as all Disneynature pictures, a genre unto themselves, must be — it is heartening to behold just for the visuals alone.

Dolphin Reef, effectively narrated by Natalie Portman, also follows the Disneynature bible, centering on the story of Echo, a 3-year-old Bottlenose dolphin prone to testing the waters after being under the supervision of his mom Kumo for the first years of life. He’s always getting into trouble, but like the young elephants mentioned above, he has to learn the ropes in order to survive in the wide-open ocean, and especially predators we meet along the way like the feared Orca whales, tiger sharks and stingrays. Of course not all whales need to be feared, and a  humpback and her baby provide hours of entertainment for Echo too.

Like Elephant, this storyline also centers on an at-times perilous journey, in this case to Muddy Fish, where the family of dolphins must know how to consume various fish to keep going. Those fish showcased throughout this gorgeously photographed visit with large varieties of sea life are alone worth the price of admission, and director Keith Scholey (Bears) leads a team of talented artisans in capturing the wonder of it all. Opening and closing sequences showing groups of dolphins surfing the waves make for the perfect bookends to this sweet tale, which despite having a 2018 copyright mark at the end is only now getting North American exposure.

The Disneynature-branded films were never box office behemoths compared with the other blockbuster releases from the company, but they are always welcome, entertaining and enlightening, with a focus on those dwindling populations with whom we share the planet — and as usual both films have closing credits sequences with the filmmakers showing how it was all done. Hopefully, Disney keeps doing them.

Check out my video reviews with scenes from the films above. Do you plan to see Elephant and Dolphin Reef? Let us know what you think.