Netflix To Require Covid Vaccinations For Actors & Other "Zone A" Personnel On Its U.S. Productions
Read the full story
November 11, 2020 12:35pm 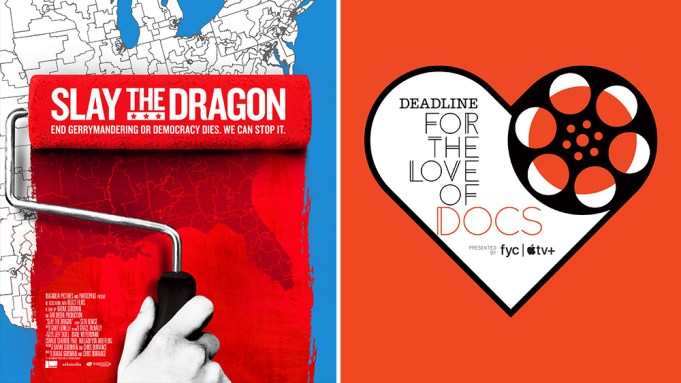 If you thought the political wars were over because the election has passed, Slay the Dragon is a sharp wake-up call to resume the fight.

Joe Biden may have won the Presidency and the Senate is focused on the duel runoffs in Georgia, but under the radar, the consequences of the 2020 Census and the dirty business of power is very much in play, as the Barak Goodman and Chris Durrance directed documentary spotlights.

“For the purposes of gerrymandering, what’s important is that it triggers a new round of map drawing,” declares Goodman in our AppleTV+ presented For Love of Docs panel on Slay the Dragon – as you can see in the video above.

“Every state of the union will now have to redraw their legislative maps, both at the state legislative level and the Congressional level, and this gives nefarious map drawers, people will ill intent, a chance to rig the game for their own party’s purposes,” the Emmy winner adds. “That’s why the Census is so important for gerrymandering.”

Having debuted at the Tribeca Film Festival last year, the Participant Media produced and Magnolia distributed picture focuses on the sharp elbowed aftermath of the 2010 Census. Tracking the efforts of the GOP’s REDMAP project and operatives like Chris Jankowski, Slay the Dragon meticulously portrays a rather bleak reality of how political lines are truly drawn and votes kicked to the curb in America, by both Democrats and Republicans.

On the flipside, the film also follows the successful moves by political novice Katie Fahey and the Michigan native’s Voters Not Politicians to seize the power of redistricting out of the backrooms and into citizen control.

“Katie’s example …shows the energy that she galvanizes, that when people, when the citizens of Michigan are finally informed and get to act on that information, they really go for it,” notes Durrance of the power that people can have in the process, even against the so-called pros. “What we hope is that Katie’s example galvanizes a national movement,” the PBS vet says.

In an America that saw hundreds of millions vote last week, Slay the Dragon may be just the film for our time. Take a look at the video above for some of my conversation with directors Goodman and Durrance from our virtual screening last night to see if you agree.