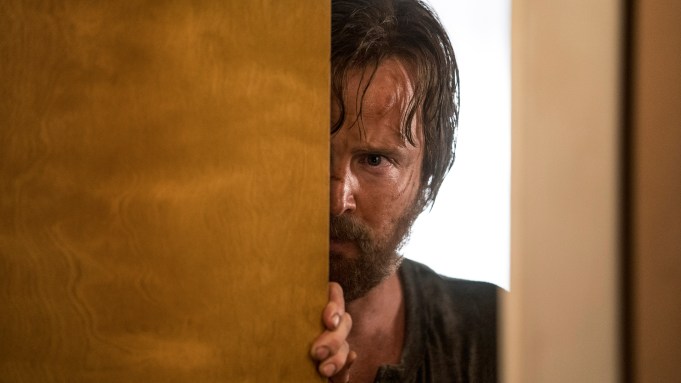 We got a fleeting taste of Netflix’s new Breaking Bad flick on Emmy night, and now it’s time for the main course: the first full trailer for El Camino: A Breaking Bad Movie, starring Aaron Paul in his triple-Emmy-winning signature role as Jesse Pinkman.

El Camino picks up in the moments after the events that wrapped the AMC series six years ago this week. Walter White has decimated Jack Welker’s white supremacist gang, and Jesse is on the run. But he’s not exactly hiding out.

Set to “Black Water” by Reuben and the Dark — expect its download sales to explode in 3 … 2 … — the atmospheric trailer doesn’t give away much plot. Instead we see Pinkman stalking and ducking, brooding and seething, aiming his pistol and plotting his course.

We know that Charles Baker and Matt Jones are reprising their respective Breaking Bad roles as Skinny Pete and Badger, but that sure seems to be a familiar voice at the end of the trailer that asks Pinkman, with due foreboding, “You ready?” His simple answer: “Yeah.”

Is it who we hope it is?

Billed as “a Netflix event,” El Camino is written and directed by Breaking Bad creator Vince Gilligan. The film launches October 11 on the streamer (watch the date announcement video here). As Deadline reported exclusively, El Camino will get a second window on AMC — Breaking Bad‘s original network home — that kicks off months after the film’s streaming debut.

Check out the trailer and key art above and some first-look images below. And enjoy.