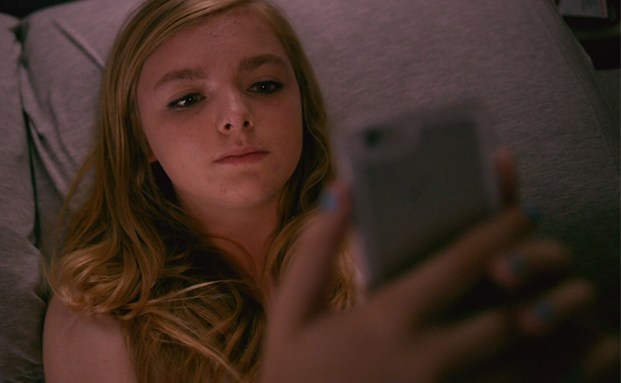 Elsie Fisher. Remember that name. She’s going to be a star.

As I say in my video review above, that is just one of the many affirmative facts coming out of Bo Burnham’s superb writing-directing debut feature Eighth Grade, which explores 13-year-old Kayla Day’s awkward final days of middle school before embarking on what inevitably will be a life-changing journey to high school. Fisher, until now best known as the voice of Agnes in the Despicable Me movies, is heartbreakingly good, and likely instantly recognizable for anyone who ever was, or maybe currently is, in eighth grade.

Unfortunately, due its R rating (largely for language), the target audience of young teens who might benefit most from seeing this sensitive, funny and perceptive take on the angst and growing pains of youth won’t be able to get in without a parent taking them along. That wouldn’t be such a bad idea since Burnham’s enormously impressive film — a big hit at Sundance — is a real conversation starter, a talk that might prove of value all around. It seems to me somehow this YouTube star/stand-up comic has captured the loneliness and self-doubt so many go through as they are on the precipice of real change. And even though the focus here is on a girl, this also is a must-see for boys in what could be a real enlightener in an age where understanding the opposite sex is more vital than ever.

Kayla is painfully shy — but not when she is staring into her laptop recording her latest video chat, where she dispenses her simple, sometimes stumbling, stated advice on life that she has picked up along the way.

That is how the film opens, and where it frequently returns, as she struggles to gain confidence against all odds. For the reality of her life, though, she eats lunch alone, has no real friends to speak of, gets invited to “cool” kids parties only out of pity, was embarrassingly voted “Most Quiet” by her peers at a school assembly and deals with the traumas of sexual awakening. But most important, Kayla navigates her way through all of this in an effort to find and become her own person.

Burnham’s script doesn’t skimp on the horrors of being that age and even includes a darkly funny sequence about a deadly serious situation: showing kids going through an active-shooter drill at school as if it is just a boring fact of their lives right now. Most devastating is a sequence where Kayla tries to get up the courage to join other kids outside at a pool party. You can see every ounce of self-doubt come to the surface as she takes those momentous steps in her green one-piece swimsuit and enters like she is on death row or something. This is a uniquely personal film that seems only interested in showing empathy for the way it is, and in this instance the way it is for Kayla.

The film wisely also has perceptive things to say about parent-child relationships, and especially in Kayla’s interactions with a sometimes-perplexed but always sympathetic and loving single dad (played beautifully by Josh Hamilton). A dinner scene where he simply tries to communicate with his daughter will be instantly recognizable to parents who deal with kids in the age of the Internet, headphones and iPhones. Also very fine in the supporting cast is a live wire of a nerdy kid named Gabe (played irresistibly by Jake Ryan), whom she meets amusingly in the pool and doesn’t realize he should be the true friend she really needs. Daniel Zolghadri is also fine as Riley, an odd dude she seems attracted to for some reason. Emily Robinson also is lovely as an older high school girl who befriends the younger Kayla and invites her to hang out with her own pals on a trip to the mall.

Above all, though, is Fisher flawlessly marching us through the moods, dreams, complications, joys, heartbreaks and realities of being 13 and not quite ready for her prime time. But it’s coming. This is one of the best performances of the year and should be remembered come awards time. Producers are Scott Rudin, Eli Bush, Christopher Storer and Lila Yacoub. A24 puts it in limited release today.

Do you plan to see Eighth Grade? Let us know what you think.