Continue to Deadline SKIP AD
You will be redirected back to your article in seconds
Skip to main content
January 5, 2022 8:48am 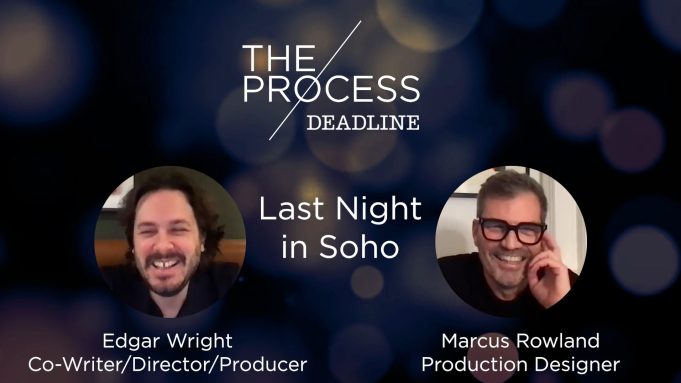 In his latest collaboration with writer, director and producer Edgar Wright on Last Night in Soho, production designer Marcus Rowland would look to tap into the glamour and seediness of London’s West End, both in the past and in the present day.

Historically, productions featuring period scenes in Soho had opted out of shooting exteriors in the nightlife hub itself given the difficulty of operating amidst its hubbub—heading to other areas of London or other cities entirely, which presented the opportunity for more control of the streets. But Wright and Rowland knew from the get-go that their film would be made in Soho proper, if it were to be made at all.

“We love Soho; we know it incredibly well,” Rowland notes, in conversation with Wright, in the latest edition of The Process. “So, the chance to actually begin to explore it again [was exciting].”

Last Night in Soho is a psychological thriller centered on Eloise (Thomasin McKenzie), an aspiring fashion designer who finds, while studying in central London, that she’s mysteriously able to travel back to the Swinging ’60s. Within the Soho of this period, she encounters Sandie (Anya Taylor-Joy), a dazzling wannabe singer whose body she occasionally inhabits, thus fulfilling a fantasy based in nostalgia. Eloise comes to find, though, that the glamour surrounding her is not all it appears to be, as the dreams of the past start to crack and splinter into something far darker.

To conquer the challenge of shooting the period-leaning film within one of London’s busiest and most inaccessible districts, Wright and Rowland would need to spend ample time strategizing and scouting with supervising location manager Camilla Stephenson—sorting out which real city landmarks they could integrate into the film, which areas they would be able to augment with period dressing, and which locations they would need to recreate on stage.

Given the fact that crowd commotion in Soho doesn’t typically die down until 3 or 4 a.m., exterior filming and the location scouting that preceded it would have to be done in the wee hours of the morning. “The only time you could actually see any of the streets and…get a sense of where we might want to shoot was at five or six in the morning,” says Rowland. “It was the only time we could actually see the places that we hadn’t really noticed, like the slightly seedier side of Soho that’s still there, and the clubs off to the side that you wouldn’t notice under the hustle of everybody else.”

Rowland adds that “quite a lot of shoe leather” was needed to secure access to exteriors for period scenes, with the production designer journeying alongside Wright and Stephenson “from shop to shop, or corner to corner,” and asking business owners for permission to change their facades. “Obviously, we didn’t have the streets for that long, so we planned quite meticulously. It was basically a day when we changed nearly everything, but [it was] surprisingly easy once we started going,” he recalls. “And it was fun because you had a lot of people who had lived in Soho for a long, long time coming up to you saying, ‘Oh, I remember that.'”

One of Wright’s favorite sets from Soho—and from his entire filmography—was the recreation Rowland did of Café de Paris, the iconic nightclub which would have celebrated its 100th anniversary in 2024, but unfortunately shuttered permanently amidst the Covid-19 pandemic. While the filmmaker had at one point considered shooting within the real space, building this key environment as a set gave him and his designer the control they needed to expand it, making their version of it “as sumptuous and glamorous as possible.”

“[The final product is] a compliment to you, where it exceeds what’s in your head,” Wright tells Rowland. “That’s always a great thing because I think your main thing as a director is, you’re trying to get what’s in your head onto the screen. So, the best feeling is when what’s on screen is better than it was in your head.”

Wright first came to collaborate with Rowland more than 20 years ago on music videos for bands including The Bluetones, as well as an assortment of commercials—including a “strange” one which saw a French actress beating up the Nicorette man. The director took note in the early days of a vital skill set on Rowland’s part—that being the ability to mine stellar production value, even from a relatively small budget. “That was always the thing that I was really impressed [with], with you,” Wright says, “is that you’re a big believer in making sure that all the money is on screen, or your pound or dollar is really being stretched.”

Wright and Rowland would next collaborate on the Channel 4 sitcom Spaced, before teaming up for beloved films including Shaun of the Dead, Hot Fuzz, Scott Pilgrim vs. the World, The World’s End, Baby Driver and Soho, among others exec produced by the former. Wright says that over the years, Rowland has become one of his closest and most trusted collaborators, contributing to each of his productions to the extent that referring to him as a ‘production designer’ seems like “too small” a description.

“When we work together, you’re usually the first person that I ever talk to because we’re talking about the production as a whole, and it’s not something that can always be specific to what your role in the credits is. You’re part of everything…when I make films with you, even after the fact,” says Wright. “Like on this last movie, Last Night in Soho, we were doing the VFX for a long time afterwards, and I’d always invite you and also my brother to any session, because I just wanted to know what you’d think—[even though] your job on the movie is long finished.”

“I think the inclusion in the process is the best bit of it. In the end, in its basest form obviously, you’re designing the sets and the looks of that. But it’s always about how it’s filmed. It’s always about how it’s interpreted. So, I’d much rather be involved in the whole process,” adds Rowland. “It just feels like the most comfortable fit, and that’s a great thing with working with you. We have a very collaborative crossover, which I think is unusual, but is great and beneficial for us all, but also makes you feel very much more invested in the project.”

In today’s episode of The Process centered on the design of Last Night in Soho, Wright and Rowland also delve into the “magic tricks” behind the film’s mirror effects, as well as the latter’s “absolutely crazy” early work in music videos, and his “baptism of fire” on BBC’s The Comic Strip Presents. Wright speaks for his part to Baby Driver memories and why “going into something being scared is always a good feeling.”

Check out the entire conversation above.