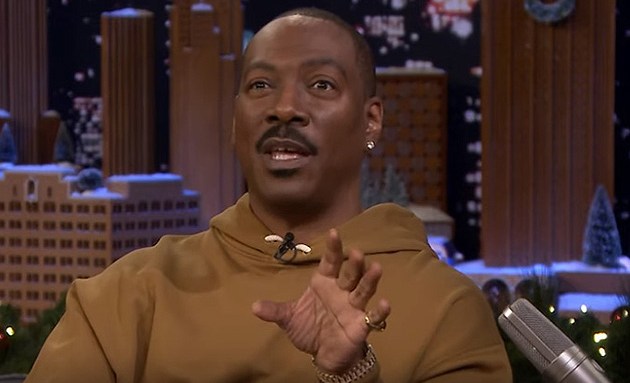 On the eve of his highly anticipated return to Saturday Night Live, Eddie Murphy stopped by The Tonight Show to share a few stories from his past and clear up some rumors.

The Dolemite Is My Name star sat down with Tonight host — and fellow SNL alum — Jimmy Fallon on Friday night and the two quickly started talking shop.

Murphy recalled a party at Prince’s mansion, and told house band member Questlove he remembered seeing him at the exclusive bash.

“That’s bizarre,” Fallon told Murphy, who replied, “It was surreal.”

The Tonight Show host then said he wanted to go through a few Hollywood “folklore” stories about Murphy. Fallon asked the fellow comedian if it was true that Dan Aykroyd and Harold Ramis wanted him to be in the original Ghostbusters film, and if so, why he turned it down.

“Yes, because I did Beverly Hills Cop,” Murphy said to applause.

“It wasn’t like I turned it down, in as much as I wasn’t available because I did this other movie,” he explained. “The only movie that I have turned down that became a big hit was that, Who Framed Roger Rabbit.”

The 1988 Robert Zemeckis film made $329 million at the worldwide box office, and won three competitive Oscars.

“I was going to be the Bob Hoskins dude,” Murphy said, adding that he thought the premise sounded silly.

Fallon then asked about the rumor that Marlon Brando called to have dinner with him after 48 Hours came out. “Yes, that was surreal, too,” he said.

Over the past few days, Murphy has been busy promoting his return to SNL, which he’ll host for the first time in 35 years this weekend.

The actor and comedian was an SNL cast member in the 1980s, and kept the audience laughing with his Buckwheat, Stevie Wonder, James Brown, and “Mister Robinson’s Neighborhood” skits.