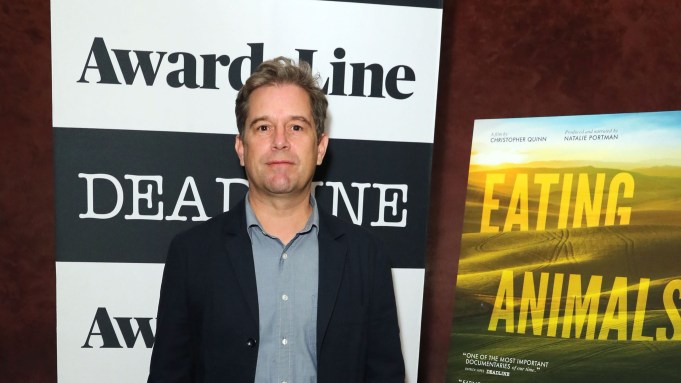 When Natalie Portman got her hands on Jonathan Safran Foer’s Eating Animals—a New York Times best-seller examining our diets, and the consequences of the choices we make—she rapidly converted from a vegetarian to a vegan, calling upon documentarian Christopher Quinn to bring this book to the screen. While the pedigree of those involved was substantial, Quinn approached this pitch with care. “To be honest, the initial response was, ‘Do we need another food documentary? What is that going to mean?’”

Turning to Foer’s book, the director decided to take on the project precisely because it offered something vital and new, as he explained to me last night, following an Awardsline screening of the film. “I felt like I was a highly educated consumer of food,” he said, “and everything got turned upside down when I read the book.”

Examining a dying system of sustainable farming taken on by a plucky 1%, who stand in defiance of “massive, vertically integrated systems” now controlling where we get our meat, dairy and eggs, Quinn felt empathy for his subjects, those “who carried on what is now the mythos of America—a small patch quilt of farms that raise our food,” and have been treated horribly by the powers that be.

Finding his reason for making Eating Animals, Quinn still needed a way in—a way of wrapping his arms around a story unfolding throughout history, involving myriad factors and shades of gray, without resorting to an account of “one factoid after the next.” For the director, it was important to make a film that was accessible, appealing not to one specific group of consumers, but to every human being—each, with their own stake in the lives of (horrifically mistreated) animals, and the future of the planet. “There’s this idea of not eating meat, which is really compelling to me, in a lot of ways, because I can see the damage it does, not only to the environment but to our own human health. There’s something very valuable about that, but at the same time, it’s a dialogue,” he reflects. “I loved living in the ambiguity of contemplating meat, and didn’t want to really make it about telling somebody how they should eat. But more about, here’s this information and let’s start talking about this.”

In the end, Quinn became powerfully involved with the story he was telling, and the countless people it has impacted in one way or another, going to great lengths to share necessary truths—truths that powerful forces have tried to hide from the public for many years, and will do anything to protect. “The industry spends billions of dollars to divorce us from where our food comes from. It’s a system that’s in place, and going up against it is disruptive to them. There are more violent moments of extreme anger that comes up that are not in the film,” the director shares. “But I will say, they know it’s wrong. You can see it in their faces, their pain, because they’re one generation away from proper farming. It’s that era of ‘Get big or get out,’ and you see that they’re not happy about it, just as we’re not happy about it. That gives me hope in a lot of ways.”