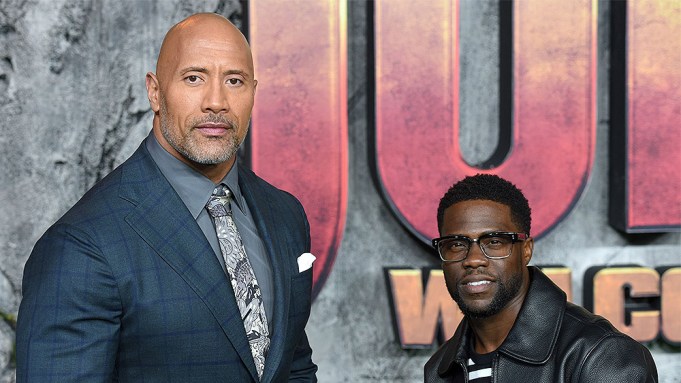 Dwayne Johnson says his friend and co-star Kevin Hart is doing well after a car accident on September 1.

“Everything is good, I spoke with Kevin, I actually refer to him as my son,” Johnson joked Monday on the debut episode of The Kelly Clarkson Show. “I connected with him today.”

The former wrestler and the comedian co-starred in the films Central Intelligence and Jumanji: Welcome to the Jungle, as well as the sequel Jumanji: The Next Level, which opens in December.

With Hart on the mend, Johnson said he left his honeymoon early to fill in for the comedian on Clarkson’s show.

“And you know what? These things happen in life and thankfully he was strapped in nicely to his car seat,” he quipped. “That’s real love.”

After saying Hart was “bummed” he couldn’t be there, Johnson cracked another joke at the comedian’s expense.

“Listen, I’m only kidding. I spoke to the pediatrician. He’s doing very well,” Johnson quipped. He then took on a more serious tone, saying Hart realizes things could have gone differently.

“Honestly, I mean, thank God, it could’ve been a lot worse. So, he’s a lucky man, and he knows it too. I wish him the best and a speedy recovery and I’m gonna see him soon,” he said.

Hart was hospitalized last weekend when the 1970 Plymouth Barracuda, in which he was a passenger, went off Mulholland Highway in Calabasas, and rolled down an embankment. He subsequently underwent back surgery.

The driver, Jared Black, was also injured. A third person was not hospitalized, authorities said.