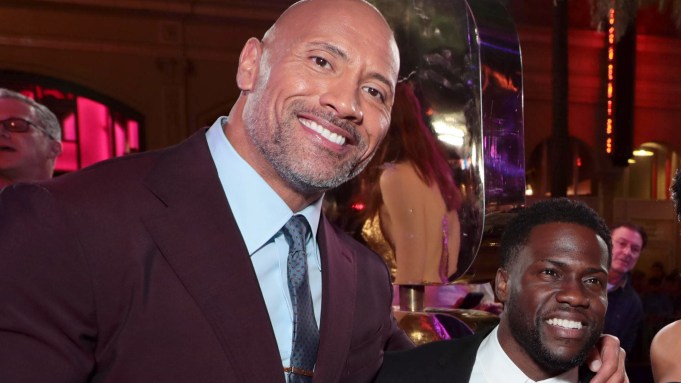 Dwayne Johnson stepped in for the injured Kevin Hart as the first guest on the first episode of The Kelly Clarkson Show, debuting Monday, Sept. 9.

In a clip released today by the show, Clarkson tells the studio audience about the last-minute fill-in. She says Hart was supposed to be her first guest, but after the Sept. 1 car accident, “one of his good friends stepped the heck up and I love him.”

Hart was hurt in a car accident last weekend when the 1970 Plymouth Barracuda, in which he was a passenger, went off Mulholland Highway and rolled down an embankment. He subsequently underwent back surgery.

According to the Clarkson show, Johnson returned early from his honeymoon in Kauai to sub for Hart on the new syndicated daytime talk show. Johnson and Hart co-starred in Central Intelligence and two Jumanji movies. The Kelly Clarkson episode taped on Tuesday, September 3, two days after the accident. The show tapes before a live audience on the Universal Studios lot in Universal City, CA.

The Kelly Clarkson Show airs in national syndication in 100% of the country, and is produced and distributed by NBCUniversal Domestic Television Distribution.