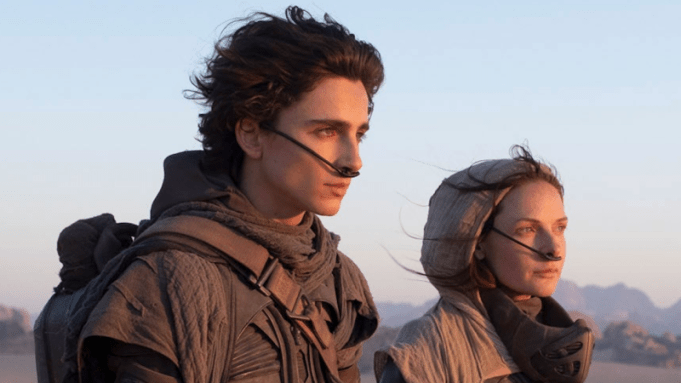 Warner Bros released a new trailer for Dune today, the first since the initial trailer hit last September prior to the recent schedule change: Denis Villeneuve’s adaptation of the classic sci-fi novel by Frank Herbert will have its world premiere at the Venice Film Festival in September before it hits theaters and HBO Max day-and-date on October 22.

Today’s trailer begins with Zendaya’s character Chani surveying the deserts of her planet Arrakis before kicking into higher gear with action scenes and a dash or two of comedy (“Look at you – put on some muscle?,” asks Jason Momoa’s Duncan upon seeing Timothée Chalamet’s Paul Atreides. “I did?”, Chalament responds. “No,” says Momoa.)

The official synopsis: A mythic and emotionally charged hero’s journey, Dune tells the story of Paul Atreides, a brilliant and gifted young man born into a great destiny beyond his understanding, who must travel to the most dangerous planet in the universe to ensure the future of his family and his people. As malevolent forces explode into conflict over the planet’s exclusive supply of the most precious resource in existence—a commodity capable of unlocking humanity’s greatest potential—only those who can conquer their fear will survive.