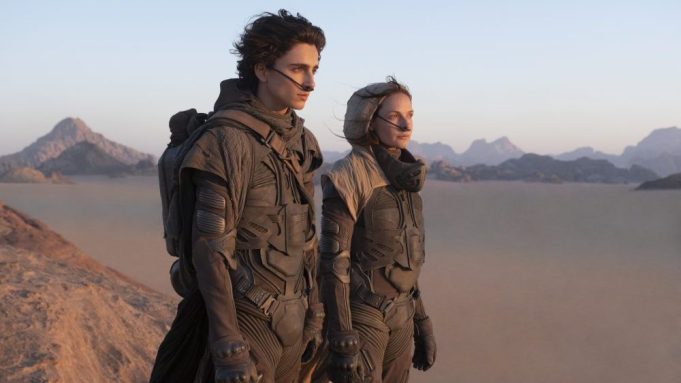 The release of the first trailer for Denis Villeneuve’s iteration of Dune is too big for just a regular debut. The scope, scale and significance to culture of Frank Herbert’s bestseller means that the first look at its big-screen adaptation has to be a moment.

In order to make this a benchmark in cinematic history and quench the thirst of the loyal contingent of Dune fans around the world, Warner Bros. called on Dune superfan Stephen Colbert to host a Q&A with Villeneuve and cast members Timothée Chalamet, Rebecca Ferguson, Oscar Isaac, Josh Brolin, Zendaya, Sharon Duncan-Brewster, Jason Momoa and Javier Bardem.

For those who are new to the world of Dune, here is the official synopsis: A mythic and emotionally charged hero’s journey, Dune tells the story of Paul Atreides (Chalamet), a brilliant and gifted young man born into a great destiny beyond his understanding, who must travel to the most dangerous planet in the universe to ensure the future of his family and his people. As malevolent forces explode into conflict over the planet’s exclusive supply of the most precious resource in existence—a commodity capable of unlocking humanity’s greatest potential — only those who can conquer their fear will survive.

When Villeneuve first read the book, he became an instant Dune fan and was obsessed by the story. When casting the film, he immediately saw Paul Atreides reflected in Chalamet.

“There’s a deep, deep intelligence in the eyes, and he has an old soul,” Villeneuve said of Chalamet. “I have the impression when you talk with Timothée he [has] lived many lives.” He goes on to say that with Chalamet’s experienced soul contrasted with his young look on camera personifies Paul Atreides.

When watching the trailer, you immediately will notice the signature Villeneuve sci-fi prestige and the epic scale that includes mind-boggling action, elegant cinematography and fantastical nuances that still leave room for grounded and very human storytelling. Villeneuve wanted to shoot in the real desert saying, “They didn’t shoot Jaws in a swimming pool.”

Chalamet said that he only shot two scenes on greenscreen and the majority of it was practical. The Oscar-nominated Call Me by Your Name actor added that there was a spirituality when it came to shooting in Jordan and it made you film like “you’re in it.”

Isaac and Ferguson, who play Paul’s parents Duke Leto Atreides and Lady Jessica agreed with his sentiment. Although Isaac framed it in a different way.

“No set piece, no X-wing, no Millennium Falcon can compare to the sheer scale of Josh Brolin’s head,” joked Isaac. “It was massive both literally and figuratively.”

One by one, other cast members joined the virtual conversation. Brolin, Momoa and Bardem, who all play warriors and “tough guys” in the movie spoke about their characters in depth and how they are connected to Paul, but when asked if they would be able to survive in Arrakis, the desert setting of Dune, Bardem was first to say, “No way, not me!”

In the film, Sharon Duncan-Brewster plays Dr. Liet-Kynes, who is the mother of Zendaya’s Chani. There is one difference between the film version of the character and the book character. In the latter, he was a man.

“It was all about concentrating on the essence of this person,” said Duncan-Brewster said of the character. “He’s an integral role. He connects all the dots…this is somebody who understands and moves between everyone.”

She said of the gender flipping of the character for the movie: “I dont think it matters that Kynes in the book is a man…what is important is what Kynes stands for.”

In regards to the timeliness of the story, Chalamet addressed how it parallels younger people of today. “I do think there is a possibility of someone seeing this movie with the coming of age that Chani and Paul are stepping into both in a huge obligation of birthright but also what all 16, 17, 18-year-olds go through which is just…growing up is hard.” He added, “There is a metaphor and lesson in this movie for everyone.”

Ferguson pointed out that she learned so much about herself from shooting this movie. “It was quite an intense shoot — the desert is so big. It’s basically mother nature engulfing you and going ‘you mean nothing’ — it takes away the ego.”

Duncan-Brewster added also chimed in about the timeliness saying, “It’s going to be a mammoth moment when people have the chance to experience something that is not only just exquisite and a feast for the eyes but is also something that we should take home with us and into our hearts. This film can inspire change.”

“Dune is a movie about the capacity of adaptation because there are a lot of changes coming,” Villeneuve remarked in regards to how its a mirror to today’s dystopian-adjacent landscape. “That’s why Dune is more relevant than ever.”

Dune opens on December 18. Watch the epic trailer above and the conversation below.