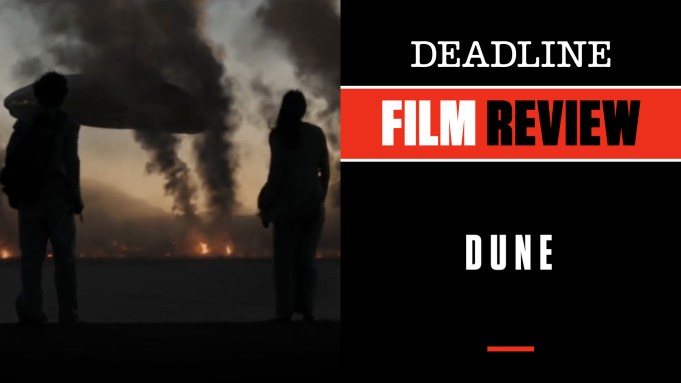 It is not much of a spoiler to note that it is Zendaya who has the last word in director Denis Villeneuve’s sweeping and spectacular new film version of Dune, which just had its world premiere Friday at the Venice Film Festival. “This is only the beginning,” says her dreamlike fierce fighter Chani. And for Villeneuve’s vision of Frank Herbert’s 1965 novel, with its legions of devoted fans in wait, this 2-hour, 35-minute epic apparently is only the beginning as the opening credits state this is just Part One.

Reportedly the director is already hard at work on a screenplay for a proposed Part Two, the plan being to bring the book fully to life in more than one film — but not as a television limited series. This is meant for the biggest screens imaginable, which is probably why Villeneuve became so vocal upon hearing the pandemic plans of distributor Warner Bros, which is opening all its 2021 films day-and-date in theaters accompanied by a one-month run on its nascent streamer HBO Max, Dune included. All of this led to a clash among Legendary, the production entity behind the film; Villeneuve; and Warner Bros. Although it is clearly headed for HBO Max as part of this deal, Dune must be experienced, as I did at Warner Bros’ Steven J. Ross theater, on a large screen with immersive sight and sound. No matter what your opinion is of the source material, this vision for bringing it alive as a movie deserves only premium exhibition.

Of course, Dune has been tried before. David Lynch’s 1984 attempt was poorly received. Lynch himself feels it is the one failure of his film career, a nut he just couldn’t crack. In fact when it came to television the network split it into two parts by adding about 45 minutes of outtakes to pad the presentation. Lynch was so upset he took his name off the TV version and used the DGA-approved pseudonym of Alan Smithee. For more on Lynch’s production, see our new interview with that film’s leading lady, Francesca Annis.

Villeneuve was clearly born to bring this one home. A devotee of the novel since first reading it at age 14, the director always had Frank Herbert’s novel on his bucket list of films he would love to make. Villeneuve has gone faithfully, with co-writers Jon Spaiths and Eric Roth, to the heart and soul of Herbert’s vision, focusing on the human element of the futuristic story, set some 8,000 years or so from now when a crisis of ecology and the environment sparks a massive turf war between two families — the Great Houses of Atreides and Harkonnen — as the battle for survival moves to an imposing planet named Arrakis, aka Dune as its native Fremen tribes call it.

Extreme heat, blinding sandstorms, killer sandworms and, well, lots and lots of sand make it a challenging place for anyone to conquer, but it is also home to Spice, the substance needed in order to exist, to power flight, and to energize the population in numerous ways. In a close-up, Spice looks kind of like paprika; next time I am in Whole Foods I will have a whole new appreciation as I walk past the spice racks.

In the lore of Dune, whole worlds can vanish without Spice. The filmmakers here — including cinematographer Greig Fraser, production designer Patrice Vermette, costume designers Jacqueline West and Robert Morgan among others — have fashioned worlds ready for epic battles, but Villeneuve, married to the more urgent themes in Herbert’s prescient novel, alssees all this is played out on a more intimate level as a family story, a father-son tale as well as a mother-son story.

Paul Atreides (Timothée Chalamet) is a young man given an extraordinary opportunity and dangerous assignment as the reins to his powerful family’s fortune are increasingly placed in his hands by his father Duke Leto (Oscar Isaac) and equally important mother Lady Jessica, a warrior priestess played winningly by Rebecca Ferguson.

Paul is green, but eager to take on the fight on Arrakis where alliances will make all the difference in battling the Harkonnen dynasty led by the ruthless and evil Baron Vladimir Harkonnen (a virtually unrecognizable Stellan Skarsgård, buried under pounds of prosthetics) who will stop at nothing to continue control of this barren land and its ever-valuable resource. His No. 1 henchman, Glossu “Beast” Rabban (Dave Bautista), is even more vicious. The stage is set for a battle, but equal weight is given to defining not just Paul, but also mom and dad. Those situations may be set far in the future, but they will have a ring of familiarity for anyone today.

The issues we deal with now — particularly taking care of our planet and its resources through conquering climate change — are not that far off from the singular vision of Herbert’s novel. Devotees like Villeneuve and his crew have elevated his story to a large scale onscreen, but not allowed it to be overwhelmed by special effects.

Regarding the latter, Villeneuve and his team has captured much of this in-camera, though his VFX team — led by Paul Lambert and Gerd Nefzer — has contributed some astonishing set pieces in all that sand. A big shout-out is necessary to the massive musical contribution from Hans Zimmer, as well.

Chalamet, playing it earnestly and effectively, is perfectly cast here, and both Ferguson and Isaac are excellent, as is Skarsgård, who seems to be relishing his over-the-top character. Among the women, Sharon Duncan-Brewster as Dr. Liet Kynes — a character written as a man in the novel — is very good in her brief screen time, as is the iconic Charlotte Rampling as Reverend Mother Gaius Helen Mohiam, who offers sage advice to Paul early on in assessing his readiness to take on the mantle. Josh Brolin is solid as Gurney Halleck, essentially a father figure as well to Paul in the House of Atreides, as is Jason Momoa as the daring Duncan Idaho and Javier Bardem as Stilgar, the inspirational voice of experience on Arrakis. The list goes on.

Producers are Mary Parent, Cale Boyter, Joe Carraciolo Jr and Villeneuve, who can safely now add Dune (Part One) to his list of impressive deep dives into very distinct sci-fi worlds, a list that also includes the Oscar-nominated and -winning Arrival and Blade Runner 2049. Warner Bros will release Dune in theaters on October 22 and HBO Max the same day.

Check out my video review above with scenes from the film. Do you plan to see Dune? Let us know what you think.