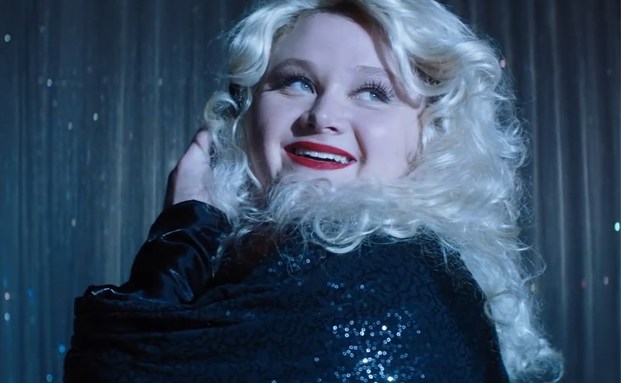 It is pretty futile to try to resist the charms of the new Netflix comedy Dumplin’, which the streamer is unwrapping just in time for the holidays. There is really nothing startlingly new about this concept or even its execution, but the sheer fun and smiles that it brings are more welcome than they ever were at this time. It is a good-spirited story, oft told, about the importance of being true to who you are inside even if others try to put you down or say you can’t chase your dreams.

Danielle MacDonald, recently of the somewhat similar feel-goodness of Patti Cake$, plays Willowdean Dickson, the plus-size daughter of Rosie Dickson (Aniston), a local Texas beauty pageant queen who now runs the same Miss Teen Bluebonnet pageant and calls her daughter “Dumplin’.” Tired of body shaming and the idea that she isn’t good enough, Willowdean takes a bold stand, joined by others, and basically crashes her mother’s beloved pageant, much to Mom’s distress. The premise is as simple as that, albeit with a side order of Dolly Parton, who Willowdean and pals idolize — even to the point of trying to get close to the country superstar by going to a Parton drag queen show and getting advice from the Dollyverse.

Parton is a big part of Dumplin’ and its considerable charm, as she has written six new songs for the film including the melancholic theme, “Girl in the Movies.” There also are a number of Parton staples including “Jolene” and my personal favorite, “Here You Come Again.” Basically, folks, this movie is a shrine to Dolly Parton.

Fortunately it’s also got Aniston, a superior talent who takes what could have been a stereotyped small-town Texas mom and wraps all the character’s anxieties, ego, vulnerability and tough love into an appealing and often very funny portrayal. This would not have worked at all if it had been played with one note, but Aniston is way too smart to do that and creates an empathetic, well-meaning, if not always right parent who it is clear very much loves her kid. Although Macdonald played this sort of character in Patti Cake$, in which she also was a waitress with loftier ambitions (in that case to be a rapper), she downplays this and earns the love of the audience without overstating the situation. There’s even a romantic interest brewing with an understanding and likable co-worker named Bo, nicely played by Luke Benward.

Odeya Rush and Maddie Baillio do well with roles that are more of the expected in this kind of movie, which is blessed to have a sharp script from Kristin Hahn that attempts to avoid the almost unavoidable clichés of this premise, and a talented comedy director in Anne Fletcher (The Proposal, 27 Dresses), making this a triumph for all the women behind of and in front of the scenes here.

Do you plan to see Dumplin’? Let us know what you think.