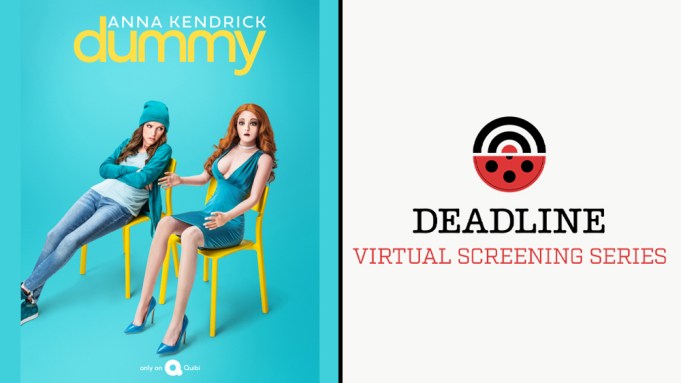 For some, finding out that the person you’re dating has a sex doll might be a deal-breaker. Not for Dummy creator and executive producer Cody Heller, who turned that experience into the Quibi comedy series.

Star and executive producer Anna Kendrick plays a fictionalized version of Cody, who strikes an unlikely friendship and writing partnership with Barbara, the sex doll belonging to her boyfriend Dan Harmon (modeled after Heller’s real-life partner and Rick and Morty co-creator).

During the AwardsLine Screening Series panel discussion, Heller shared that the idea sparked at a time when she had parted ways with her writing partner, around the same time she started dating Harmon, who now is her fiancé .

“At the time, very early on in our dating, we decided to be very upfront about all of our sexual stuff, all of our kinks and fetishes,” Heller said. “We just wanted to have a very honest relationship. One of the things that came out, this was probably literally like our second date, was that he had a sex doll.”

Although she has never seen the doll, Heller couldn’t get the life-size object off her mind.

“I found myself really just couldn’t stop thinking about her and was like, I need to, I guess, write about it because I just kept having trouble writing on my own,” she recalled. “And so it just became this thing of all of the stuff in my life coming together and being like, ‘OK, I’m going to just write what I know,’ which is that I’m feeling these weird feelings about my boyfriend’s sex doll. The idea of her sort of became my writing partner and that was the thing I kind of needed to get something out of my soul.”

For Kendrick, Heller’s bold expression of her sexuality and insecurities was what drew her to this project.

“I feel like I had a similar experience to basically everybody that read the script, which is I’ve never really read something where somebody’s being so open about their insecurity and sexuality,” said Kendrick. “We’ve seen movies where people talk about like being kinky, but it’s always like cracking up as a naughty nurse. And it’s like fantasies that nobody has and insecurities that nobody has.”

Kendrick added, “I really was interested in the way that Cody was willing to put all of that specificity in a piece of art that for other people.”

Tricia Brock directed all 10 episodes of Dummy, which is available on Quibi. Donal Logue also co-stars as the boyfriend, while Meredith Hagner voices self-proclaimed feminist Barbara.