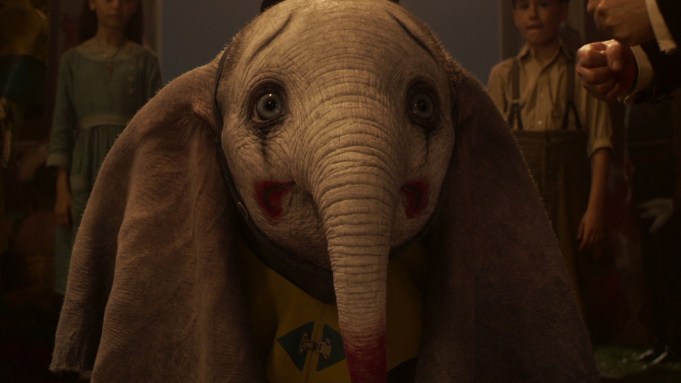 The best scene in Steven Spielberg’s 1979 comedy 1941 has Robert Stack as an Army general crying while sitting in a theater. He’s watching the poignant scene in Dumbo where a caged Mrs. Jumbo rocks her little newborn with her trunk while singing the lullaby “Baby Mine.” Like Stack’s stoic character, who could resist crying in that scene, and who doesn’t love Disney’s 1941 64-minute animated masterpiece?

Now with the new-age Disney Studios rummaging through its library on a quest to turn every animated classic into a live-action reboot, we get Tim Burton’s two-hour take on Dumbo, the first of five — count ’em, five — such live-action remakes scheduled just for this year alone (Aladdin, The Lion King, the Maleficent sequel and the Disney+ streaming debut with Lady and the Tramp). I can’t say I shed any tears during Burton’s reconstruction of that “Baby Mine” scene, however poignantly it was done. It is a hard act to follow, and so is Walt’s original. That said, the wonders of the advanced CGI elephants and other creatures on display here — Dumbo in particular, with those giant ears — have their own power and reason for being. If you leave the memory of the original behind and approach this as a whole new telling, you might still believe that an elephant can fly. And isn’t that the point?

As you might expect, Burton brings real visual panache to this story, even resisting the impulse to make a sometimes dark story darker. Instead, with screenwriter Ehren Kruger, he has necessarily opened it up, putting the emphasis on the human characters for about 60% of the film. On its own terms, it works just fine, and I suspect that kids will eat it up. The cast is impressive too. Holt Farrier (Colin Farrell) is a one-armed war vet longing to get back to stunt riding in the circus but instead relegated by Big Tent owner Max Medici (Danny DeVito, doing his best Danny DeVito) to taking care of the pregnant elephant he has just bought. Lo and behold, the baby Mrs. Jumbo gives birth to turns out to be a very big-eared little fellow called Dumbo. He’s instantly an outcast, except to Holt’s kids Joe (Finley Hobbins) and Milly (Nico Parker), who discover one day that, with the help of a feather, Dumbo can fly. Once that is known, the circus is a sellout and Max has a hit on his hands.

Enter the quasi-villain of the piece, V.A. Vandevere (Michael Keaton) ,who shows up along with aerialist Colette Marchant (a wonderful Eva Green) and buys the circus, just so he can get Dumbo — knowing it is the kind of attraction that will crown his Disneyland-type utopia called Dreamland. Unfortunately he gets a little too greedy in the process.

So that’s the gist of it, as we see Dumbo’s mother locked up again, while Colette forms a partnership with Dumbo by doing an aerial act together. Stuff happens. The elephant flying sequences are dazzling, and the whole circus ambience works well in this outing. Bartitone Bates, played by Michael Buffer, is the ringmaster who gets things going wryly intoning, “Are you ready to Dummmmmmbo?”, which is of course a play on his trademarked “Are you ready to rummmmmble?” Nice touch, but this is not your father’s Dumbo.

Among the rest of the cast, the great Alan Arkin turns up in a couple of scenes as a banker that Vandevere is courting for business and it is always good to see him, however briefly. Differing from the animated original for the simple fact that humans really weren’t much a part of it, this version has a beat all its own. When I first heard they were contemplating a live action Dumbo I winced, but I have to say with a top drawer group of artisans led by Burton behind the scenes it is still a lot of fun and ought to be a smash. Burton’s go-to composer Danny Elfman delivers a strong score while intertwining hints of the original Oscar winning music. At the end credits Arcade Fire offers a new version of “Baby Mine”. The message about finding your own way and being true to yourself regardless of appearance, as well as a strong statement about keeping animals out of captivity, is worth remembering no matter when, how, or why Dumbo comes flying into our lives. Producers are Kruger, Justin Springer, Derek Frey, and Katterli Frauenfelder. Disney sends it soaring Friday. Check out my video review above with scenes from the film.

Do you plan to see Dumbo? Let us know what you think.