Continue to Deadline SKIP AD
You will be redirected back to your article in seconds
Skip to main content
May 5, 2020 6:31pm 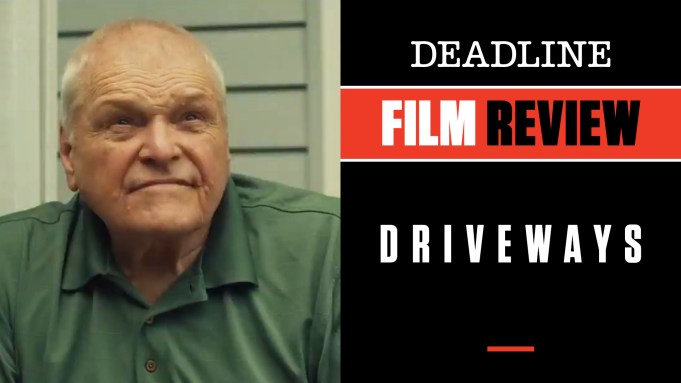 Brian Dennehy, who died just three weeks ago, left behind a gift for movie fans with one of his final performances in the simple yet truly moving indie drama Driveways. Coming in a period when many are desperate for human connection, The film might be the perfect antidote, even for its short 83-minute running time.

Dennehy, proving that we just lost one of our best actors, poignantly plays Del, a widowed Korean War vet in his 80s who lives next door to a home that belonged to the deceased sister of Kathy (Hong Chau), who arrives in the neighborhood with 8-year-old son Cody (Lucas Jaye) in tow to clean out and sell her sibling’s house. What she discovers is sis was a real pack rat as the place is nearly uninhabitable. This begins the long process of getting it in shape for sale.

Meanwhile, Cody wanders next door and strikes up an unlikely friendship with Del, and though about they’re eight decades apart in age, they have more in common than most BFFs. As the film rolls along, it is clear that director Andrew Ahn and writers Hannah Bos and Paul Thureen are more interested in the small things that make life worthwhile, the tiny memories we make when we need them most, and in what brings us together rather than what tears us apart. This is the ideal movie for this moment, even if you might not realize it until its singular charms sneak up on you when you least expect them to appear.

Dennehy is simply perfection here as an octogenarian living out his remaining years, playing bingo at the VFW hall with old friends like Rodger (Jerry Adler), who is slowly entering into dementia, and also being there for a sensitive soul like Cody. The boy could use a few friends himself, even as he engages in makeshift wrestling matches with the kids in this neighborhood — the same ones he invites to his birthday party as the rollerskating rink, only to find Del is his only pal who shows up.

One of the film’s best scenes happens right afterward as Del suggests a better location for the kid’s big day and takes him and Kathy to his bingo game for a birthday Cody never will forget. A scene on Del’s porch toward the end of the film likely will have you in tears as he counts his regrets and offers Cody some sage counsel. To say more would be to spoil it, but whenever there is a compilation of great moments in Dennehy’s career, this scene should be included — an awards-worthy moment if ever there was one.

Chau is exceptional in a very different kind of role than her breakout a few years back in Alexander Payne’s Downsizing, while Christine Ebersole has a few amusing scenes as a neighbor with a habit of not quite knowing when to stop talking. Young Jaye is a total natural as Cody and part of the reason this film works as well as it does in grabbing the heart when it is needed most. James Schamus, Celine Rattray, Joe Pirro and Nicolaas Bertelsen are the producers. FilmRise opens it this week on VOD and digital after premiering a year ago at the Berlin Film Festival. Check out my video review with scenes from the film at the link above.

Do you plan to see Driveways?  Let us know what you think.

Hollywood Remembers Brian Dennehy And His “Larger Than Life” Roles