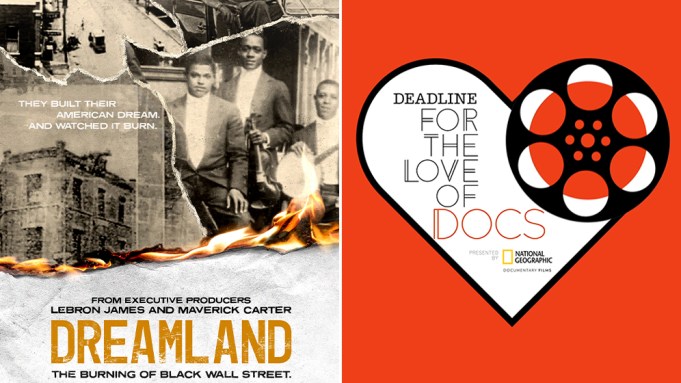 In the early 2oth century, African Americans built something extraordinary in the Greenwood section of Tulsa, Oklahoma: a thriving community of Black-owned businesses that prospered to such a degree it came to be known as Black Wall Street.

But then, in May 1921 it came to a smoldering end when a mob of white residents—supported by an aerial attack—demolished Greenwood, killing as many as 300 or more African-American citizens.

That shocking story, and the ongoing search for the remains of victims of the massacre, is told in Dreamland: The Burning of Black Wall Street, directed by Salima Koroma. The documentary from CNN Films and The SpringHill Company screened as part of Deadline’s For The Love of Docs series, sponsored by National Geographic.

“I first learned about Greenwood when I was like 22… when I was in college, specifically in a class about African-American communities,” Koroma explained during a discussion of Dreamland after the screening. “What I read was not about the destruction but about the community they built first–sort of this uptopia, these utopias that existed in America, and Greenwood being one of them and then it being destroyed.”

Koroma said it wasn’t easy to get the documentary project off the ground.

The equation changed when SpringHill stepped forward to realize Dreamland. The entertainment, IP development and commerce company was founded by LeBron James and Maverick Carter.

“A film like Salima’s is really the essence of our company. We’re about empowerment, we’re about stories that matter,” said Jamal Henderson, chief content officer at The SpringHill Company. “LeBron can’t really do anything small so what we love to do is give these types of films a bigger platform… We had some serendipity in that there was an anniversary coming up around this horrible event and for buyers that means maybe they’re ready to listen to that. They think there’s a moment or marketing hook.”

“Other pop culture moments like Watchmen, like Lovecraft [Country], other things in the zeitgeist had happened to draw some attention to this story,” Henderson said, “but none as deep as our film goes.”

Dreamland: The Burning of Black Wall Street shows how the Greenwood neighborhood has struggled since the frenzy of violence razed homes and block after block of businesses. It has been consistently deprived of resources and the city ran a freeway through it.

“You go there and the community is no longer as boisterous as it used to be. They’ve lost a lot of money, they lost a lot of the generational wealth and there are still survivors there who have not gotten any reparations,” Koroma said. “The community needs money and not just the commemorations. As happens, [reporters] went into the community, they did all their stories and then leave. And still this community is asking for reparations or something to happen.”

Descendants of victims of the massacre also want a full accounting of what happened to the bodies of those who were slaughtered in Greenwood. The film shows fitful efforts by the city to search for mass graves.

“People were really, really drawn to the film because there was a present-day journey happening with the excavation,” Henderson said. “The work is not done. We’re in the first inning… And there’s other Tulsas, there’s other cities, there’s other massacres and all of those need to be illuminated.”