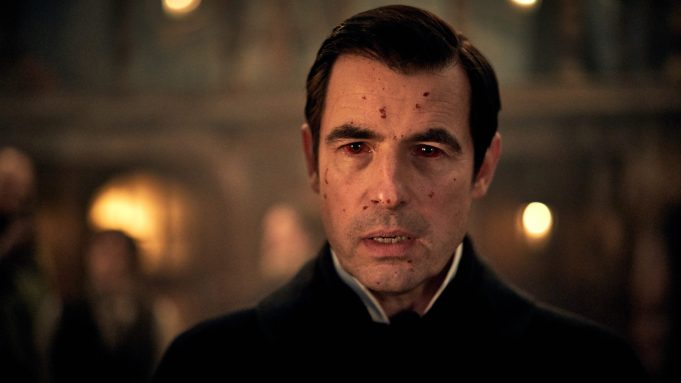 Updated with Netflix premiere date: BBC One has dropped a second trailer for Steven Moffat and Mark Gatiss’ gruesome reimagining of Dracula.

The three-part drama, made by Sherlock producer Hartswood Films, launches on BBC One on New Year’s Day before making its way over to Netflix on January 4, 2020.

It’s a gothic reworking of Bram Stoker’s 1897 story about a Transylvanian vampire who moves to England to find new blood. The blood-sucking Count is played by Danish actor Claes Bang.

At the premiere of Dracula this week, Moffat and Gatiss said the thought of revisiting the character initially started as a joke but quickly gathered pace when their ideas kept flowing.

“We’d done Sherlock Holmes and the second most filmed character as we make our way down the list of plagiarism, was Dracula. As we talked about it, we started having ideas that we thought were quite good. It got to the point where we thought we should take this seriously,” Moffat said.

The end result is an uproariously gothic creation that does not pull any punches in the horror stakes. Bang is magnetic in the central role, dancing between menace and flickering humor. Moffat said the aim is for audiences to be laughing one minute and grossing out the next.

Jonny Campbell (Westworld), Damon Thomas (Killing Eve) and Paul McGuigan (Sherlock) direct the series. Gatiss, Moffat and Sue Vertue executive produce for Hartswood, Ben Irving for the BBC, and it will be handled by Larry Tanz and Carolyn Newman for Netflix.