Continue to Deadline SKIP AD
You will be redirected back to your article in seconds
Skip to main content
April 2, 2020 11:17am 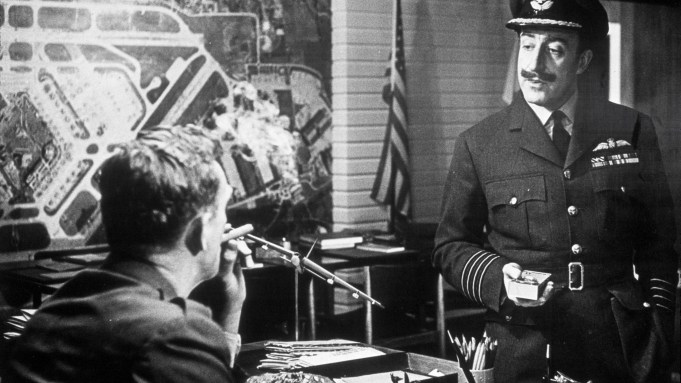 EXCLUSIVE: At least once a week in the midst of this coronavirus crisis, I like to take the time to focus on the classics, movie-wise that is, because if you don’t find time to see them now, you probably never will. Last week it was a blast to the past — 1962, which some say might be the greatest year ever for movies. This week, thanks to Sony Pictures Home Entertainment, I have another reason to talk immortal movies.

So here’s the thing: Sony Pictures has torn up its summer theatrical release schedule, moving most of it deeper into fall or out of this year altogether and into 2021. This is unprecedented, and it seems like every studio is either doing it or will be. (Paramount just did the inevitable today and pushed Top Gun: Maverick from June to Christmas, among other moves.) Having taken Ghostbusters: Afterlife, Peter Rabbit 2 and Marvel’s Morbius off the summer schedule and into next year, and transferring the Tom Hanks war film Greyhound off its June 12 date into an unspecified weekend beyond summer, what do they have left until at least September?

It’s an opportunity for those who still want the next best thing while stuck at home — because who actually knows how long this thing is going to go on — with the optimal big screen, cranked-up sound and visually splendid experience that is 4K Ultra HD, aka yet another way to buy my movie collection all over again. It might not be Imax, and certainly not the same as theaters for me, but with most of them now closed, this is pretty good when you can’t leave the neighborhood — especially when it is not just more recent blockbuster flicks getting this kind of tender loving care for film nerds like me.

On June 16, Sony will release the Columbia Classics 4K Ultra HD Collection of six films from its vast library never before given this kind of treatment. They include Best Pictures Oscar winning or nominees such as Lawrence of Arabia, Gandhi, Mr. Smith Goes to Washington and Dr. Strangelove Or: How I Learned to Stop Worrying and Love the Bomb. All of these have been released before on video but never like this with a limited edition run of 8,000 units in the U.S., a hardbound book, and tons of extras including several documentaries and other goodies.

The other two films selected by the studio are more recent: 1996’s Jerry Maguire and 1992’s A League Of Their Own (which might be the closest we get to baseball this season). So how did they get in here with the quartet of certified classics? Sony took a poll of consumers asking which “modern” classics they wanted to get this kind of 4K treatment, and out of a reported 30,000 responses League was No. 1 and Maguire was second. So there is something here even for anyone unaware that movies existed before the ’90s.

Check out the exclusive trailer SPHE has put together at the link above.

For those who never got a chance to see these movies in a theater, I would say this is the next best thing — even though when I play 4K Ultra HD in the house, the cats run for cover. It’s pretty cool, though. And it is heartening see a couple of black-and-white gems in the format. One is the 1939 James Stewart-Frank Capra pic Mr. Smith Goes to Washington. In these times of a Senate that just seems so partisan and ineffectual, it is nice to believe a public servant like Mr. Smith could even exist. It’s as timely as ever, even if we are longing to find a few real Mr. Smiths out there these days. And then there’s Stanley Kubrick’s Dr. Strangelove from 1964, with its brilliant Peter Sellers performance, a hilarious comedy about an impending nuclear war. Here is a movie as sharp and satirical — and again timely — as the day it was made.

Of course intelligent epic stories such as Lawrence Of Arabia and 1982’s Gandhi will thrive in this format, and League and Maguire are superbly made examples of Hollywood craftsmanship that between them have two of the movies’ most irresistible lines: Renee Zellweger telling Tom Cruise “You had me at hello” and Tom Hanks pleading, “There’s no crying in baseball!”

These six titles are just a drop in the bucket for Columbia, which has yet to release a bevy of its certified Best Picture Oscar-winners in this heightened format, including On the Waterfront, From Here to Eternity, It Happened One Night. The Last Emperor, Oliver and more. Previously only its 1957 Best Picture winner The Bridge on the River Kwai made it to 4K Ultra HD, so I am hoping that if the reaction is strong to this effort to highlight its storied past, we’ll see more vintage gems rather than just the new titles that get all the attention these days.

The fact that the original box art for Columbia Classics is calling this Part 1 is very encouraging. And it would be nice if all the studios did this on a regular basis. Most people don’t have the opportunity to see the greats the way they were meant in pristine condition on the big screen. Many are not even projectible anymore, desperately in need of restoration. The titles in this set continue to have a life, but there are so many others in these studio libraries that need the help. Warner Bros, perhaps more or as much as any other, has made a concerted effort to keep their past alive with their Warner Archive video program and of course Turner Classic Movies, but in the age of streaming and seemingly having everything at our fingertips it would be nice to know these classics will always be with us in the best condition possible.

Sony says they are doing this for the ultimate fan. Hopefully they will also pick up a few new fans for the classics along the way. Again I will point out my motto: “Every movie is a new movie if you haven’t seen it.”