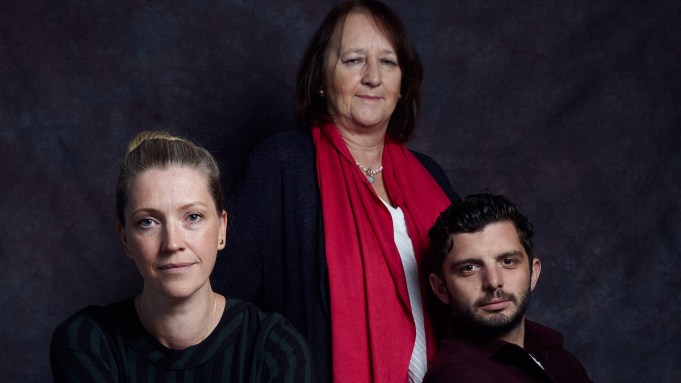 Getting the band back together for the big-screen debut of Downton Abbey made the Brexit negotiations look like a “walk in the park,” according to producer Liz Trubridge.

“Finding a window in which everybody had time, that 10-week period in which we could get that huge cast together [was a challenge],” Trubridge said during the Focus Features panel at the Ham Yard hotel. “The poor lawyers at Carnival said that bringing this cast together made the negotiations for Brexit look like a walk in the park.”

But Fox added that despite a few first-day nerves, it didn’t feel too different to shooting an episode of the ITV drama. “We’re a very close company of actors and it feels very much like a theater production in that way,” he said. “We were all a bit nervous, like going back to school. We had more time to create the shots and you felt the scale of it, but for us actors it was the same, once we got past that first day we got back into the rhythm of it and everybody had a great time.”

The Focus production, which was released this summer, had long been rumored and Trubridge said that she, creator Julian Fellowes and Carnival Films boss Gareth Neame began discussing it during Season 5 of the series, which was a huge hit on PBS Masterpiece in the U.S.

“I think we started talking about it probably during series five, when we knew were going to wrap up in the next season,” she said. “Part of the thing for us was that we always aimed to shoot the TV series cinematically and obviously it leant itself to a film. We had an idea for the story, and we really, really wanted to achieve it, but we knew it was going to be an incredibly difficult task because no one in their right mind sets out to do a feature film with 20 main characters. So we just thought, ‘Well, we’re gonna do it, but if we’re going to do it, it has to stand on its own. It’s got to be something that people can come to even if they haven’t seen the series.’ ”

Robbins discussed the regal costumes that she brought to the stage and her process of rooting around in London’s Portobello Market and Paris for gems that could be used.

“The challenge of taking it from the small screen to the big screen was literally that the costumes were going to be seen on a massive scale, so my quality control was that much higher,” she said. “And then there was also the fact that, over the course of the series, I’d had nine episodes with which to tell a story, which meant literally hundreds of costumes per character, whereas with the film I had fewer costumes, so I had to kind of consider them a bit more. But as a film, it meant that I had a bit more time to do that, which was wonderful because I then had the ability to really delve in deeply to my research for the new characters that arrived.”