Continue to Deadline SKIP AD
You will be redirected back to your article in seconds
Skip to main content
February 11, 2020 6:09pm 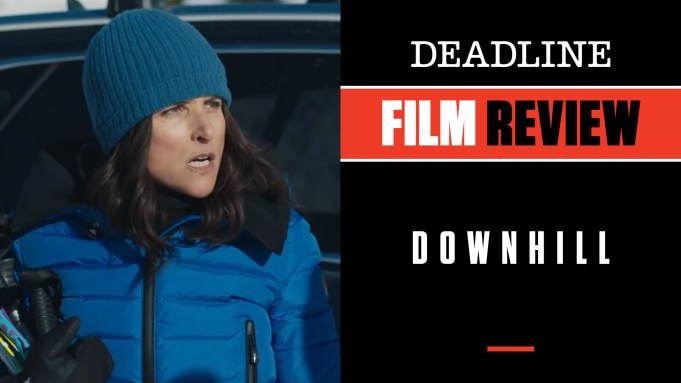 In 2014, Ruben Ostlund’s Swedish film Force Majeure hit a nerve, not just in his country but also on the worldwide art house circuit. Now it has been Americanized, and for those fearing something unworthy of the original, fear not. In the hands of the Oscar-winning The Descendants screenwriters, the writing and directing team of Nat Faxon and Jim Rash, who share script credit here with Jesse Armstrong (Succession), are too smart to screw this up. They are helped enormously with the teaming of Julia Louis-Dreyfus and Will Ferrell, who are perfectly cast as the the wife and husband who take their two boys on a ski vacation to the Alps and find a great divide in their own marriage.

The premise has the family eating lunch at a restaurant just outside a ski lodge when an avalanche comes barreling toward where they are sitting. As it appears it is about to hit and bury them, Ferrell’s character, Pete, impulsively runs, leaving the family behind. It turns out it was simply a controlled avalanche, and signs had been posted warning guests that it was happening — in other words, nothing to worry about. But Louis-Dreyfus’ character, Billie, is confused and disturbed and not sure what to make of it all.

The tension between the pair builds throughout the brisk 86-minute running time and comes to a head in an extraordinary 11-minute scene in which they are visited by a office colleague of Pete’s named Zach (Zach Woods), who is travelling through Europe with his girlfriend, Rosie (Zoe Chao), and somehow winds up in the same area as Pete and family. In a tense, to say the least, encounter, they find themselves in the middle of an increasingly taut argument between Pete and Billie, with accusations and excuses flying. It is brilliantly played and written, and I found it more effective that even anything in the Swedish version. The film examines many personal issues surrounding family and relationships, why we do what we do, and what the consequences can be. It is an enormously satisfying take on the material and flows nicely, a fascinating conundrum for this couple.

Shot in the Austrian Alps, Downhill is handsomely mounted by Rash and Faxon (The Way Way Back), and very well cast with Louis-Dreyfus nailing the role of a wife and mother forced to question everything she ever believed about her marriage, genuinely searching for answers where there are no easy ones. Ferrell resists turning the whole thing into farce, and expertly plays a man who knows he is caught but doesn’t know how to explain what he did, much less explain it to his wife in a way that saves the marriage.

Among the supporting cast, Woods and Chao are excellent, especially in the tense scene that looks like something out of Who’s Afraid of Virginia Woolf? as they are unwittingly stuck in a fight not of their making. Miranda Otto serves up some sharp if broad comic relief as a local who likes to talk about sex lives, hers and everyone else’s. There’s also some brief work from Giulio Berruti, Billie’s ski instructor who gets a little too close for comfort.

Producers are Stefanie Azpiazu, Anthony Bregman and Louis-Dreyfus. The newly rechristened Searchlight Pictures (with the first unveiling of the new logo sans the word Fox) releases via Disney on Valentine’s Day, not exactly the perfect date night subject, probably. Check out my video review with scenes from the film by clicking the video above.

Do you plan to see Downhill? Let us know what you think.