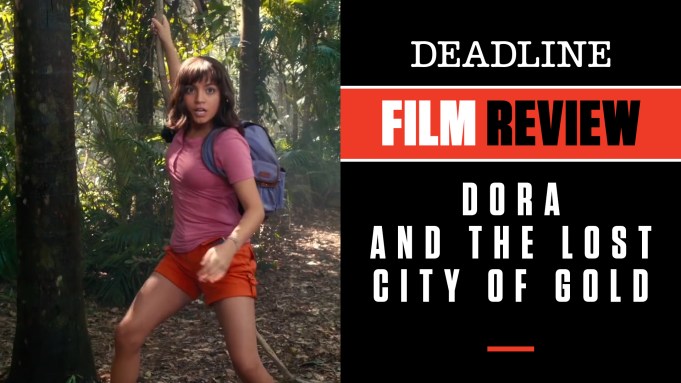 Maybe it is kind of like kicking a puppy, especially since the Nickelodeon big-screen version of their circa 2000 animated kids series Dora the Explorer is so sweet and enthusiastic. But this live-action take is really only going to appeal to audience members whose heads don’t reach quite above the seats. Unlike Nick’s feature versions (and even the Broadway musical) of Spongebob SquarePants that has a certain hip vibe that justified its motion picture iteration, this outing, which has been handsomely mounted by director James Bobin, feels like it is stuck in another time, one that today’s generation of kids have left behind.

Somehow rated PG, this is really harmless G stuff at best (the fart jokes are about as edgy as it gets), even though you have to give it props for its casting — particularly Isabela Moner, so great in Sicario: Day of the Soldado, and exuding non-stop sunniness and optimism here in the title role.

Like a cross of Spy Kids and National Treasure among others of that ilk, this is about as slickly squeaky clean and PC as it gets. The only difference from the original is the age, with Dora now ready for high school after a life living with animals in the jungle abode of her parents (played by Eva Longoria and Michael Pena). Fortunately, her cute CGI monkey sidekick Boots (voiced by Danny Trejo) helps liven up these scenes and runs away with the movie. Benicio Del Toro voices the quirky fox Swiper, and there is a midway animation sequence that kind of makes you wish they did the whole thing as a ‘toon.

Anyway, Dora is shipped off to Silverlake High where she thoroughly embarrasses Cousin Diego (Jeff Wahlberg, yes of that clan) with whom she is staying with his parents. She is undeniably a square peg in this environment but that is fine since it allows screenwriters Nick Stoller and Mathew Robinson to drive home the point that being different is not a bad thing at all. One of the teen gang named Sammy (Madeleine Madden) might disagree as she gives Dora trouble until eventually getting with her program. Randy (Nicholas Coombe) is the one student who seems to like to hang with Dora, but these kids all soon make up the quartet thrust into the main event: a search for the city of gold on her old home turf.

Once the film starts to go all Indiana Jones on us, things liven up a bit (basically because that CGI monkey is back), and executive producer/co-star Eugenio Derbez hits the scene as sort of a guide helping the kids on their quest, but falling prey to the elements for over-the-top slapstick side trips into quicksand among other attractions — is it giving away too much to suggest that Derbez may have more on his mind? Anyway, lots of sanitized action ensues as the gang gets closer to the elusive goal, our heroine’s parents are endangered, and Dora’s explorer training comes into play.

The cast adds significant energy, especially Moner, who gives it her all, and you have to admire that. Kids responded nicely at the premiere. Producer is Kristen Burr. Paramount opens it Friday.

Check out my video review at the link above with footage from the film. Do you plan to see Dora and the Lost City of Gold? Let us know what you think.