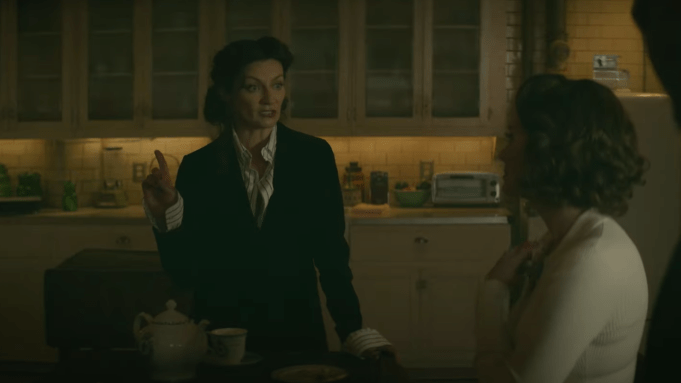 Madame Rouge touches down in the Doom Patrol with the HBO Max series’ latest Season 3 trailer.

On Wednesday, the HBO streamer unveiled the latest look at the superhero series. Still taking the kooky and trippy tones of previous snippets, the latest trailer also provides Doom Patrol fans with the first look at Michelle Gomez’s Madame Rouge.

“I seem to have traveled here by a time travel capsule,” she says. “I came here because something very big is set to occur, and it needs to be stopped.”

Season three will open on the culmination of Dorothy’s (Abi Monterey) confrontation with the Candlemaker that leads to a devastating loss. The Doom Patrol is at a difficult crossroads and each member struggles to face who they are and who they want to be. And things get a whole lot more complicated when Madame Rouge arrives in a time machine with a very specific mission, if only she could remember it.

The latest trailer also introduces the Brotherhood of Evil, the Sisterhood of Dada and even more threats that take the Doom Patrol by surprise.

“They are coming for us, this is everyone’s problem,” Madame Rouge adds.

The superhero series is produced by Berlanti Productions in association with Warner Bros. Television with Jeremy Carver, Geoff Johns, Greg Berlanti, Sarah Schechter, Chris Dingess and Tamara Becher-Wilkinson serving as executive producers. The series is based on characters created for DC by Arnold Drake, Bob Haney and Bruno Premiani.

Watch the trailer above, and see key art below.