Continue to Deadline SKIP AD
You will be redirected back to your article in seconds
Skip to main content
December 7, 2021 4:02pm 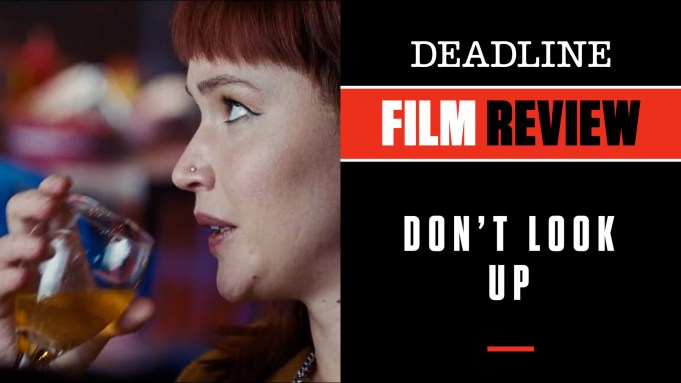 Few filmmakers these days seem to be working in the long-cherished tradition of sharp movie satires that make a greater point about the world. Adam McKay — whose films have moved on from pure farce like Anchorman and Talledega Nights to pointed, topical satires like his Oscar-winning script for The Big Short and the amusingly-political Vice — has now focused on his deep concern about the ever-growing climate crisis in his star-studded latest Don’t Look Up for Netflix.

McKay initially intended this project as a more serious take on the subject, and in fact told me in 2018 he was mulling doing a movie that would deal in a major way with our seeming blindness (in some quarters) to an impending environmental nightmare unless we start to act. Well, when he (and David Sirota, who shares story credit here) came up with the angle of an out-of-control, planet-ending comet hurtling towards Earth, his latest idea turned into the kind of satire for which he is becoming known. The idea of playing something as deadly as this for laughs is a good one because maybe people will actually start to see ultimately the health of this planet is no real joke.

Assembling a killer cast, McKay takes on the absurdity of having just six months to fend off our total destruction in the era of social media, one-note news shows and general malaise. No one seems to be getting the message. It is hilarious and frighteningly plausible all at the same time.

Leonardo DiCaprio is Dr. Randall Mindy, a low-level astronomer and professor who stumbles onto the fact that a nightmarish comet is coming our way in six months and will almost assuredly wipe us all out unless we do something about it and get our act together before it is too late.

With the help of his equally-concerned grad student Kate Dibiasky (Jennifer Lawrence, back in top form) as well as Dr. Oglethorpe (Rob Morgan), Mindy sets about to warn the world in an effort that takes them all the way to the Oval Office to a somewhat blasé President Orlean (Meryl Streep) and her Chief of Staff son Jason (a very funny Jonah Hill) who don’t quite see the ultimate urgency and plan instead to take it into committee meetings to “assess.”

They have similar luck during an appearance on a dopey news show, The Daily Rip, on which anchors Brie Evantee (Cate Blanchett) and Jack Bremmer (Tyler Perry) try to laugh their way through the team’s increasingly frantic efforts to get people to take action.

In the mix we also have a dead-on Mark Rylance as a sort of Zuckerberg/Bezos-style billionaire with his own answers to impending doom. There’s also Timothée Chalamet, and even Arianda Grande turning up, the latter with a LOL song that has to be heard to be believed.

Francine Maisler has done an exceptional job of casting the large ensemble involved here as McKay turns his satire into a kind of Mad Mad Mad Mad World approach in showing our complete ignorance in a world that now exists in 24-hour news cycles and dim-brained Twitter commentary. The brilliance of putting this cautionary tale about the need to save Earth from climate change catastrophe into the context of our turning a blind eye to a killer comet is inspired.

DiCaprio is excellent as a guy who has seen the dreary future but can’t seem to get anyone to listen to him. Streep is a riot as a clueless President, while Hill steals every scene he is in as the object of her nepotism; you don’t have to think long and hard where McKay got the idea for that. Blanchett is having a ball as your typical entertainment-oriented blond anchorwoman, and Perry nicely balances her.

McKay was clearly inspired by classics in the genre from Dr. Strangelove, which turned nuclear war into comedy, to Network and Wag the Dog among other fondly-remembered gems we now recognize weren’t far off from getting at some real truths. Certainly the spirit of Billy Wilder also lives within McKay. We are the better for it, and I can’t wait to see what he does next — if we don’t blow ourselves up before he gets the chance.

Producers are McKay and Kevin J. Messick. Netflix releases it in theaters Friday and begins streaming on December 24.

Check out my video review above with scenes from the film. Do you plan to see Don’t Look Up? Let us know what you think.