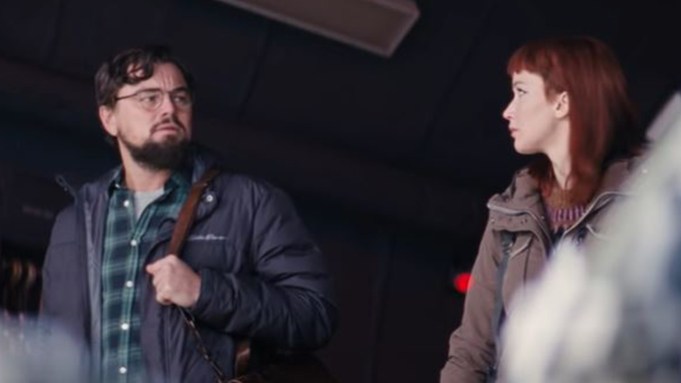 Netflix has unveiled a new clip from Adam McKay’s Don’t Look Up, which will hit theaters on December 10, and arrive on the streamer on the 24th.

In the Oscar-winning writer-director’s satirical sci-fi pic, a comet is hurtling towards Earth. So what are we gonna do about it? Jennifer Lawrence and Leonardo DiCaprio play Drs. Kate Dibiasky and Randall Mindy, two low-level astronomers who go on a media tour to warn mankind that the end of days might be near.

The new clip takes us into the White House, watching as the scientists attempt to convince President Janie Orlean (Meryl Streep) and her son and Chief of Staff Jason (Jonah Hill) that they should be worried about what’s to come.

While Mindy shares that the meteor is “5 to 10 kilometers across” and will cause “mile-high tsunamis,” the President and her son can’t be bothered by the news. “I’m so bored,” Jason says. “Seriously, stop.”

The White House meeting closes with Jason urging the scientists to “Sit tight and assess.”

Check out the new clip from the film above.