Continue to Deadline SKIP AD
You will be redirected back to your article in seconds
Skip to main content
June 18, 2019 4:50pm
1Comments 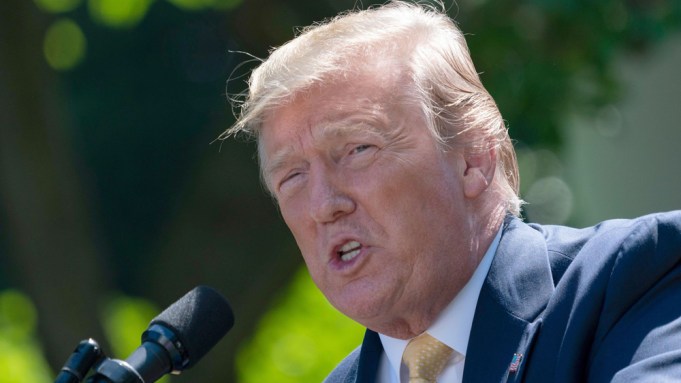 President Donald Trump is set to launch his 2020 reelection bid tonight in Orlando, Florida. Trump and Vice President Mike Pence will make it official at a rally at the 20,000-seat Amway Center. True to form, Trump targeted the “Fake News” media in a morning tweet, pointing out the crowds already lining up for tonight’s event. It begins at 8 PM ET.

“The Fake News doesn’t report it, but Republican enthusiasm is at an all time high,” Trump tweeted Tuesday morning. “Look what is going on in Orlando, Florida, right now! People have never seen anything like it (unless you play a guitar). Going to be wild — See you later!”

Trump campaign spokesman Marc Lotter told news outlets Tuesday morning that the campaign had set up an “outdoor festival area” that will feature live bands before the event.

Trump’s remarks will focus on “promises made, promises kept,” Lotter said, during an interview on CNN, adding that “the president will talk not only about what he’s done but what he hopes to do.”

According to news reports, several protests are planned for the rally, including undocumented immigrants who had worked at Trump golf resorts, as well as Puerto Rican and Latino organizations who oppose Trump’s immigration policies and the President’s treatment of Puerto Ricans following Hurricane Maria. There’s also word that the “Baby Trump” balloon may make an appearance, which depicts the president as an angry orange baby holding a smartphone.

Meanwhile, the Orlando Sentinel published an editorial today on the day of Trump’s visit announcing it would not endorse him for re-election.

“Some readers will wonder how we could possibly eliminate a candidate so far before an election, and before knowing the identity of his opponent,” the paper said. “Because there’s no point pretending we would ever recommend that readers vote for Trump.

“After 2½ years we’ve seen enough,” the paper continued. “Enough of the chaos, the division, the schoolyard insults, the self-aggrandizement, the corruption, and especially the lies. So many lies — from white lies to whoppers — told out of ignorance, laziness, recklessness, expediency or opportunity.”

Watch the livestream of the rally above.