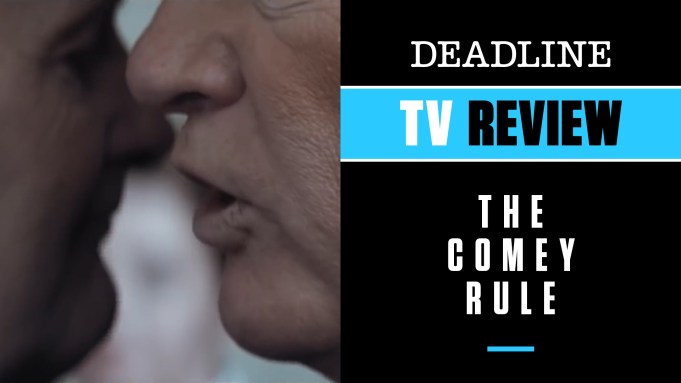 “Useful idiot” is a pretty self-explanatory term the Kremlin has long used to describe expendable assets that they develop and deploy but never respect. It is also a pretty applicable phrase to sum up the current President of the United States, at least according to Showtime’s excellent and deeply unsettling The Comey Rule which airs September 27-28.

Watch my video review above.

The fact is, coming after years of convoluted and compromised probes like the Mueller Report and a failed impeachment, the Jeff Daniels- and Brendan Gleeson-led The Comey Rule may prove the most important drama in a year that clearly has had no shortage of drama. With a strong bench that includes Holly Hunter, Scoot McNairy and the consistently on point Michael Kelly, The Comey Rule vividly depicts an administration lurching towards lawlessness even before Donald Trump took office and investigations into Russia’s interference in the 2016 election burgeoned.

Based in part on the pink slipped ex-FBI director James Comey’s memoir A Higher Loyalty, the two-parter does jump around a lot in time and political space. To that end, policy wonks and partisans may find their favorite tidbit of the far-reaching bureaucratic battle left out. I get that reaction, but I also say get over it. This is Showtime, not C-SPAN.

Similar to the state of the union the past several years, it has been a turbulent ride for the series written and directed by Billy Ray. At one point, The Comey Rule was pushed to the post-election scheduling graveyard. Pushback from Ray and others saw Showtime parent ViacomCBS change its mind and set the late September dates for the small-screen showdown between the Daniels-portrayed Comey and Trump.

It was a wise move. In a Shakespearean-scale saga with postmodern players and huge stakes for our democracy, the former Celebrity Apprentice host is broadly portrayed with combover perfection by Harry Potter alum Gleeson. This Trump is a stitched together Falstaff and Richard III, with all of the latter’s self-aggrandizing and wicked inclinations and none of his intelligence. Perched on premium cable, I’m not sure The Comey Rule will cost Trump the 2020 election, but it sharply brings to life a man clearly unsuited for the office he currently occupies.

Long review short: Whether you are a card-carrying Democrat, a fan of Jim Comey, part of of Trump’s MAGA base or an undecided voter, The Comey Rule reveals that the emperor truly has no clothes. It’s not a pretty sight, ethically, politically or otherwise.

In that context, watch my video review above for more of my take on The Comey Rule.

The Showtime event series is executive produced by Shane Salerno, Alex Kurtzman, Heather Kadin and the Oscar-nominated Ray and produced by CBS Television Studios in association with Home Run Productions, The Story Factory and Secret Hideout.