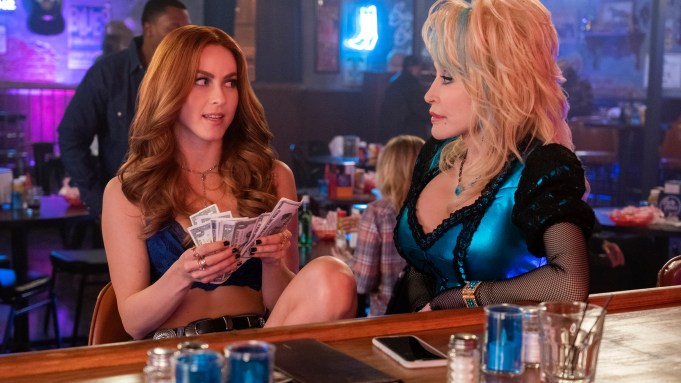 “Jolene, I’m begging of you, please don’t take my man — please don’t take him just because you can.” That gut-wrenching lyric from Dolly Parton’s classic 1970s hit gets a new spin when Julianne Hough embodies the auburn-haired homewrecker whose “beauty is beyond compare” and with whom the narrator simply “cannot compete.”

Here is the first trailer for Dolly Parton’s Heartstrings, the upcoming Netflix anthology series that showcases the stories, memories and inspirations behind eight of the country legend’s most beloved songs. Along with “Jolene,” the tunes getting the episodic TV treatment are “These Old Bones,” “If I Had Wings,” “JJ Sneed,” “Cracker Jack,” “Sugar Hill,” “Down from Dover” and “Two Doors Down.”

“The songs that I’ve written, they’re the stories of my life,” Parton says in the clip. “Every triumph, every struggle, every smile, every sorrow — it’s the melody of my memories. It’s the sound of my heartstrings.”

All eight hourlong stand-alone episodes launch November 22 on Netflix. Check out the trailer above.

These Old Bones
Kathleen Turner – “Miss Mary Shaw aka Old Bones”
Ginnifer Goodwin – “Genevieve”
Kyle Bornheimer – “Landon”
Writer: Jim Strain
Director: Joe Lazarov
Synopsis: A big-city lawyer comes home to TN to convince an alleged “witch” (Old Bones) to sell her land to a mining company. She wrestles with her past and the future of the town.

Cracker Jack
Sarah Shahi – “Lucy Jane”
Rochelle Aytes – “Scarlett”
Jessica Collins – “Monica”
Tammy Lynn Michaels – “Bitsy”
Writer: Lisa Melamed
Director: Liesl Tommy
Synopsis: Two stories — one past, one present — about the power of unconditional love between a girl and her dog, and that same girl, now grown, who questions what her life means and who she can truly count on when faced with her greatest fear.