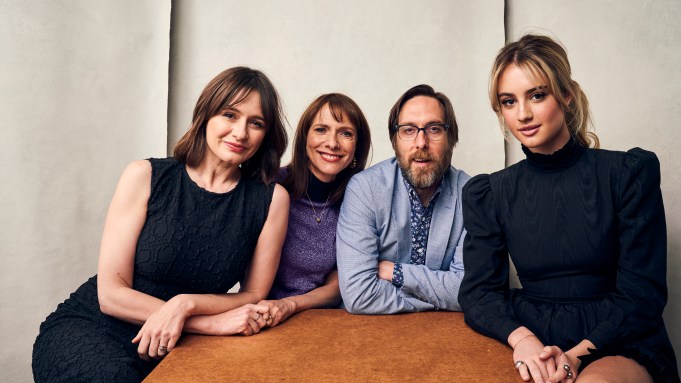 Following their work on the series Doll & Em, which focused on the relationship between a burgeoning Hollywood actress and her BFF assistant, Dolly Wells and Emily Mortimer reteam for the female status comedy Good Posture, about slacker film school grad Lilian (Grace Van Patten) who has no choice but to live with a prestigious and reclusive author Julia Price (Mortimer) in her Brooklyn brownstone.

Instead of fighting in person, they begin a daily ritual of passive aggressive and canny note writing that entails Julia leaving snippy notes about cleaning and cooking in Lilian’s diary.

Says Wells, who wrote her feature directorial debut here, “One of my inspirations was that my cousin had lived with a writer for a short while, and I thought that was interesting, the idea of living with someone who on the outside world is very much respected and sort of hallowed in their words, and people pouring over it, and to see what they’re like indoors, and then to have somebody who has no interest in books or reading apart from herself, I thought it would be an interpreting combination.” Yet in their passive aggressive notes between each other, “They’re writing something together…their future,” says Wells.

In Good Posture, Julia has been stuck on her copy, and spends her days closed in her room. She’s largely a ghost. When Lilian sees her ex-boyfriend with another girl, she’s forced to lie that she’s making a documentary about the reclusive Julia –something she actually goes through with, landing interviews with such notable authors as Zadie Smith, Joanthan Ames and Martin Amis who have their take on Julia. Timm Sharp plays George, a dog walker who becomes a sounding board for Lilian to lean on.

Take a look at our Tribeca Film Festival studio interview above. More showtimes for the rest of the fest here. AMP International is handling global rights on the film.