Continue to Deadline SKIP AD
You will be redirected back to your article in seconds
Skip to main content
January 16, 2020 2:34pm 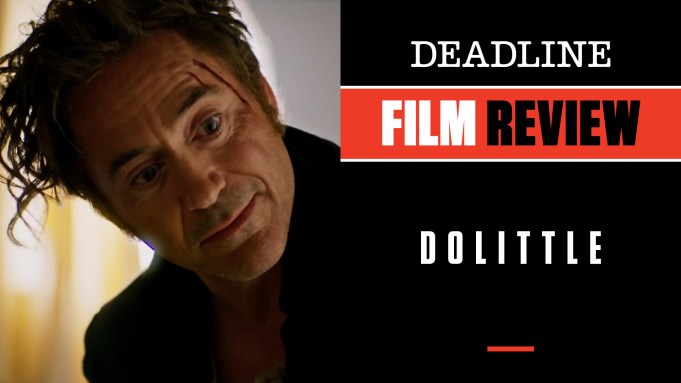 I was a fan of Eddie Murphy’s attempts to put a contemporary spin on the 100-year-old Hugo Lofting children’s book Dr. Dolittle in both its 1998 original and 2001 sequel. I even confess to really liking the critically bashed 1967 musical version starring Rex Harrison that still managed to nab a Best Picture nomination, along with two Oscars including for the catchy song “Talk To the Animals.” But the new, and very expensive, 2020 model starring the usually reliable Robert Downey Jr. is largely a miss. And, sad to say because I am a fan, the fault is in our star, who also produced through his Team Downey production company.

I am a sucker for the menagerie of animals these movies require, even in CGI form as they are here, so I don’t blame them including Poly (voice of Emma Thompson), Chee-Chee (Rami Malek), Yoshi (John Cena), Plimpton (Kumail Nanjiani), Dab-Dab (Octavia Spencer), Jip (Tom Holland), Kevin (Craig Robinson), Barry (Ralph Fiennes), Betsy (Selena Gomez), Marion Cotillard (Tutu), or Frances de la Tour (as the fire-breathing but troubled Dragon). The all-star voice cast as you can tell is first-rate, and how do you go wrong with talking gorillas, orangutans, polar bears, squirrels, birds and so on?

The effects work on the animals is excellent, but the script often lets them down. It even appears there was probably a lot of tinkering in post-production with the dialogue, and though some of the jokes work, many fall flat. The script is credited to Dan Gregor, Doug Mand and director Stephen Gaghan, a fine filmmaker but one whose previous real-life films like Traffic and Syriana don’t exactly scream that he’s got the chops to steer a massive children’s movie like this one.

Right from the moment we meet him, Downey seems like an actor in desperate search of finding a character; maybe because the role has been so defined before by Harrison and Murphy in their own unique voices that the disheveled and eccentric good doctor in this one seems out of place. But more importantly, there is no chemistry with those animals he talks to all the time, and that is kind of fatal in an enterprise like this one.

The plot here has Queen Victoria in dire need of help and near death, which sends Dolittle and his gang into action on a voyage to save her. It is designed as an epic journey, but it quickly hits choppy waters with under-defined supporting characters along the way including newly minted Oscar nominee Antonio Banderas as King Rassouli, the father in law of Dolittle whose wife was tragically killed in a shipwreck, as well as the resident villain Dr. Blair Mudfly, played with such overkill by Michael Sheen that he might as well be twirling a mustache. The production values are decent but the visuals tend to overwhelm and wash away the natural charm inherent in this property. I hate to say it, but the tone is off and it is noticeable.

That said, the animals are cute and young kids will like them, so maybe that is enough for entertainment-starved families this time of year. It just could have been so much better. Susan Downey, Jeff Kirschenbaum and Joe Roth are producers. Universal opens it tomorrow.

Check out my video review with scenes from the film at the link above. Do you plan to see Dolittle? Let us know what you think.