Continue to Deadline SKIP AD
You will be redirected back to your article in seconds
Skip to main content
December 27, 2019 9:39am 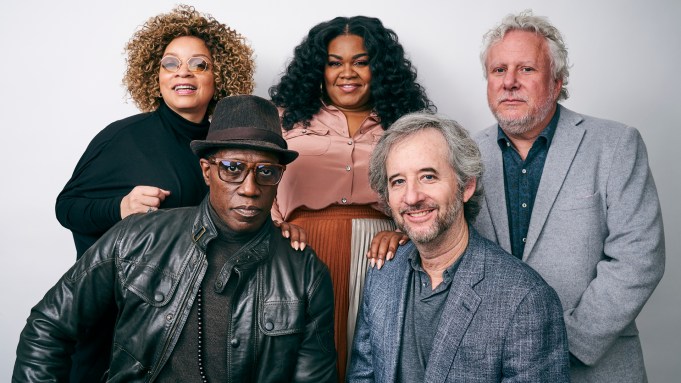 Netflix’s Dolemite Is My Name tells the true story of the efforts in the 1970s by Rudy Ray Moore (Eddie Murphy) to make a movie based on his stage persona Dolemite. Murphy’s co-stars and collaborators told the crowd recently at Deadline’s The Contenders New York how they filled in Moore’s crazy ensemble.

Wesley Snipes plays D’Urville Martin, the name actor Moore casts who ends up directing Dolemite too. “During his day he was ghetto fabulous,” Snipes said onstage in front of a packed house of Academy and guild voters. “One of those actors who was popular in the neighborhood but not so much in the industry and took advantage of every change he had.”

Da’Vine Joy Randolph played Dolemite’s female lead Lady Reed. “It really meant many things as woman, as a woman of color, as a woman over a size 2,” Ralph said. “It’s important to have that visibility because with that visibility I believe that’s where change happens. Sometimes we can’t get it in a textbook or we can’t get it off of a piece of paper. Sometimes when you watch movies and you experience the theater and entertainment, you’re able to produce more change.”

Screenwriters Scott Alexander and Larry Karaszewski had been developing a Rudy Ray Moore film since their success with Ed Wood and The People Vs. Larry Flint. They met Moore before he passed away in 2008.

“He comes in with the hat and the cane and the suit and the whole show,” Alexander said. “Then after hanging for a while, he drops the façade. Now he’s just an old guy and he’s tired and he’s been on the road for 40 years. We started seeing that Rudy and Dolemite were two different guys.”

The writers couldn’t get backing for the film until their success with FX’s limited series The People Vs. O.J. Simpson: American Crime Story. “For a movie that took 16 years to get going, it happened really quickly,” Karaszewski added.

Oscar-winning costume designer Ruth Carter looked at Moore’s contemporaries in 1970s cinema, not just Dolemite. “I looked at a film called The Bad Bunch,” she said. “It was an amazing ’70s film that went through a carnival and showed you all the different styles and looks of the ’70s.”