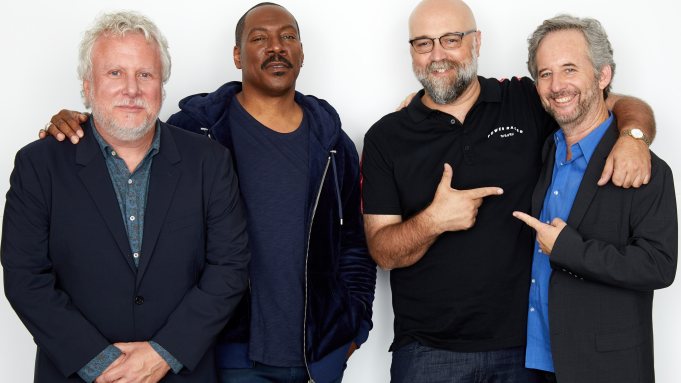 While Eddie Murphy doesn’t necessarily compare his career trajectory to that of comedian and film producer Rudy Ray Moore, who he portrays in the Netflix film, Dolemite Is My Name, he acknowledges Moore as “an inspiring figure.”
Moore, who was stung by a string of showbiz failures, took his fate into his own hands. Borrowing from the street mythology of 1970s Los Angeles, Moore assumes the persona of Dolemite, a pimp with a cane and an arsenal of obscene fables. He pulled together his own resources to fund his passion project, Dolemite, which went on to become a runaway box office smash and a defining movie of the Blaxploitation era.
“When I got older and I found out that he had financed his movies, and financed his records, and put his stuff together, and he was like an entrepreneur and guerrilla filmmaker, that’s the part of his stuff that was really interesting, and I thought that would make a great movie,” said Murphy during his stop at Deadline’s TIFF studio.

“The more I started learning about Rudy’s experience with it, I realized, he really is kind of the unappreciated, unknown patron saint of guerrilla filmmaking. He did it all himself. He was producing it, he was putting it together—the whole look, everything—and even if it falls short, to some people’s standards, it doesn’t stop it from becoming a classic. “

Murphy and Brewer were joined at the Deadline studio by co-star Keegan-Michael Key as well as the film’s screenwriters  Scott Alexander and Larry Karaszewski.

To see more of the conversation click the video above.