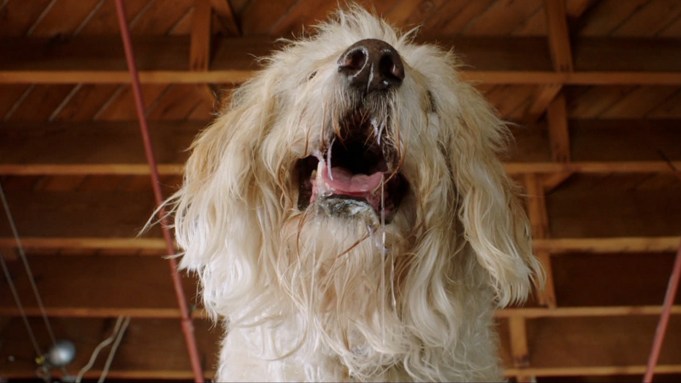 The dog days of August are upon us, and so is the appropriately titled new family confection Dog Days, which teams humans and their pets. The result is uneven in the laughs department, though there are enough warm moments to qualify as a decent time-waster as the summer movie season winds down with typical August afterthoughts before the fall Oscar crop is unleashed.

This film comes from director Ken Marino, responsible in different ways for the likes of How to Be a Latin Lover, the Adam Sandler vehicle That’s My Boy, Wanderlust, and Ten (the latter being one of the most painfully awful comedies I have ever seen — Marino co-wrote it), so you might know what to expect here. His past tendencies toward excess and over-the-top attempts at humor are thankfully kept in check in Dog Days, though, in favor of a harmless ensemble affair that zips in and out of barely related storylines so quickly it almost resembles a two-hour episode of The Love Boat — as I say in my video review above, the movie is aiming to be closer to a Love Actually-style romp, or even Must Love Dogs.

Regarding the title of that latter and better film, you must love dogs to appreciate what’s on display here because most of the humans in it are one-dimensional stereotypical types found in B-level romantic comedies. Plus, you need a scorecard just to keep up with them as scripted by Elissa Matseuda and Erica Oyama.

Elizabeth (Nina Dobrev) is a newscaster dealing romantically with new co-anchor and ex-NFL player Jimmy Johnston (Tone Bell) when not in sessions with her dog’s shrink Danielle (Tig Notaro stealing the few scenes she has with deadpan authority). Tara (Vanessa Hudgens) works as a waitress at a coffee place across the street from a veterinarian office run by a young vet named Dr. Mike (Michael Cassidy,) for whom she pines but can’t get noticed, until she finds a stray dog in the alley and takes it in for a checkup under the guise that she is a devoted dog owner. She commiserates with BFF Daisy (Lauren Lapkus), who is a dog walker of course.

Enter Garrett (Jon Bass), who runs the New Tricks Dog Rescue and has a really good heart he wants to share with Tara, on whom he has an awkwardly displayed crush. Then there are the travails of married couple Ruth (Jessica St. Clair) and Greg (Thomas Lennon), who are expecting twins and must enlist her irresponsible brother Dax (Adam Pally) to take care of their shaggy dog for a while, even though he is more concerned with making it as a musician in the band he has with ex-girlfriend Lola (Jasmine Cephas Jones).

OK, then there is another married couple we keep switching to, Grace (Eva Longoria) and Kurt (Rob Corddry), who have adopted a young girl named Amelia (Elizabeth Caro) but can’t seem to make her happy despite their many attempts at getting to know her as new parents. One day a lost stray pug comes into their life and instantly transforms Amelia. Still, they have to make nominal attempts to find the real owner who, as the audience already knows at this point, is Walter (Ron Cephas Jones of This Is Us), a lonely widower who watched helplessly as the pug ran away one day. He is joined in his search by snarky pizza delivery boy Tyler (Finn Wolfhard). Eventually all of these intertwining stories come to their own conclusions in typical sitcom fashion, even if the dogs are the only actors we remember fondly.

Still, knocking Dog Days, a movie that has its heart in just the right place, would be like kicking a puppy. This is a movie that promotes animal rescue operations, and that makes it just fine with me, sending a better message than watching the week’s competing openers sending monster Meg sharks and Slender Man to kill people. Plus, it is the increasingly rare live-action all-family film, and for that it gets points and a pass from me during these “dog days” of August. Producers are Mickey Liddell, Peter Shilaimon and Jennifer Monroe. LD Entertainment is the distributor.

Do you plan to see Dog Days? Let us know what you think.