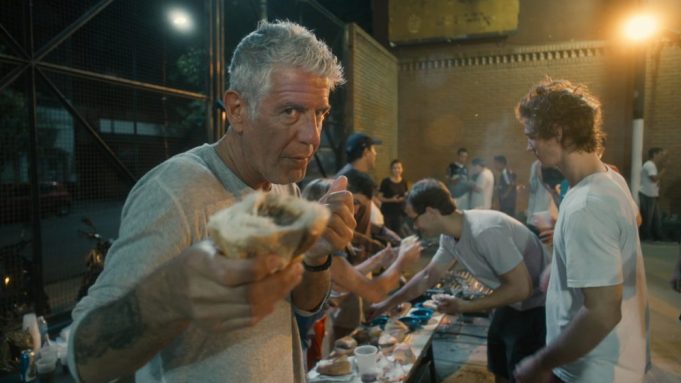 The late chef and writer Anthony Bourdain dazzled the world, first with his cooking and then with his prose. His death by his own hand in 2018, while he was on location in France shooting his CNN series Parts Unknown, remains deeply upsetting to his friends and fans.

“Up close I saw the kind of cratering effect his death had on them, which was devastating for the people around him,” noted Oscar-winning filmmaker Morgan Neville, whose documentary Roadrunner: A Film About Anthony Bourdain, premiered at the Tribeca Festival Friday night. “These were, hands down, the hardest interviews I’ve ever done for anything I’ve ever made, in part because there’s so much kind of unprocessed emotion and trauma around him.”

The film explores how Bourdain shot to fame after the publication in 2000 of his memoir and restaurant world expose, Kitchen Confidential, then evolved into a host of cooking and travel shows, culminating with his CNN series that delved as much into culture and politics as it did food.

“I felt like as a documentary filmmaker that I had this kinship with him, that in a way he was a documentary filmmaker,” Neville observed. “A lot of what he tried to do with his work is what I’ve tried to do with my work, which is talk about how culture gives us a sense of identity and how we perceive other people and how culture can be a bridge to how we perceive and treat other people and build empathy, all these kinds of things he was doing in his show all along. [I felt], ‘Oh yeah, like he’s one of the good guys who was fighting the good fight.’”

Some of Bourdain’s fights were internal.

“He was somebody who had such a deeply complex emotional architecture to him,” said Neville. “He was really, underneath it, a shy and insecure person that had all kinds of issues, with depression and anxiety, certainly OCD. He documented many of his own struggles in his books. Kitchen Confidential is also a memoir of him being a junkie and him dealing with addiction.”

Roadrunner crafts a portrait of a gifted but unsettled man, a searcher who never quite found peace.

The Deadline Studio is presented by Verimatrix. For more of our conversation with Morgan Neville, click on the video above.