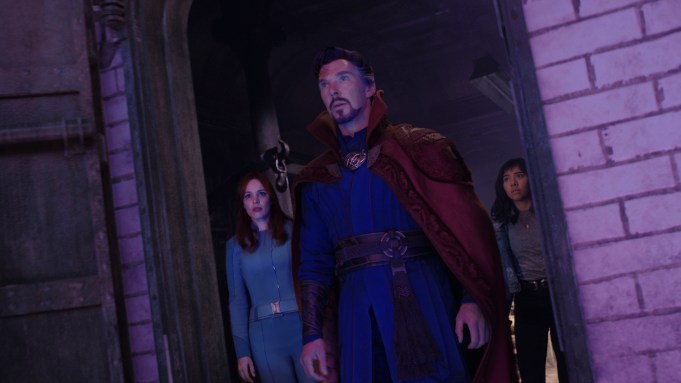 If you sat around for the end credits sequence on Sony/Marvel’s Spider-Man: No Way Home, you’ve already seen this trailer for Disney/Marvel’s Doctor Strange In the Multiverse of Madness and know what will be happening to Doctor Strange (Benedict Cumberbatch) after casting that nasty spell for Peter Parker that messes with the multiverse.

It’s clear that the universe continues to be jumbled post-No Way Home, and the magical Doctor needs the help of Wanda Maximoff, who he seeks out as she’s retreated from the world in the wake of her calamities with Westview on WandaVision. “What do you know about the multiverse?” Strange asks her as Wanda shoots him a WTF look.

And, following the events of No Way Home, it’s not a coincidence that Strange meets up with his doppelganger, albeit a nefarious, black-and-white version. Throughout it all, Strange is pining for the love of his life, Dr. Christine Palmer (played by Rachel McAdams, who also makes her return for the sequel). Also, it’s been speculated that Chiwetel Ejiofor’s Mordo, Strange’s previous friend, becomes an enemy in Part 2 here which is directed by none other than filmmaker Sam Raimi himself, who was responsible for Sony’s first three Spider-Man movies released between 2002-2007.

BTW that watch in the beginning of the trailer — it’s definitely not the Rolex that Clint Barton handed to Laura in the season-finale episode of Disney+’s Hawkeye last night.

The movie, which was described by Marvel boss Kevin Feige at Comic-Con 2019 as having horror elements, will kick off summer on May 6, 2022 and seek a new global box office record.