Continue to Deadline SKIP AD
You will be redirected back to your article in seconds
Skip to main content
November 4, 2019 6:10pm 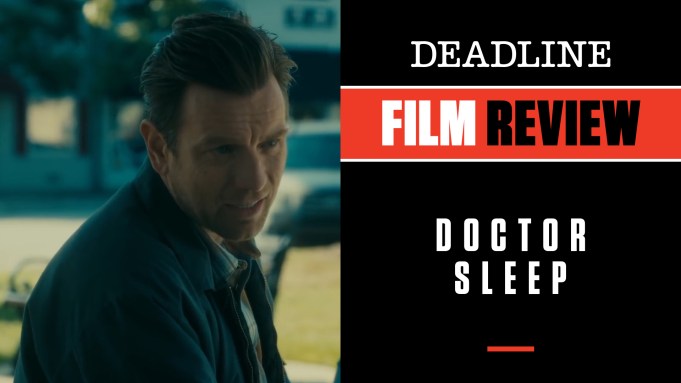 One of my favorite horror movies ever is Stanley Kubrick’s 1980 screen adaptation of Stephen King’s The Shining. The author himself famously didn’t share my enthusiasm, endorsing instead the idea of the inferior 1997 ABC miniseries based on the book. But King, still gold these days at the box office after the success of the IT movies, gets another shot as his novel Doctor Sleep — in which he revisits elements of The Shining — now is a major, but overlong, motion picture starring Ewan McGregor as the grown-up version of Danny Torrance, the son of Jack Nicholson’s Jack Torrance from the original.

Danny, now Dan Torrance, is a recovering alcoholic in a 12-step program and a bit of a drifter who never really has gotten over the burden of his psychic powers. He works in a hospice, actually using those powers to send off the dying elderly patients with their last breath, hence why he is known as Doctor Sleep. He has the help of a cute cat who shows up on the bed of the about-to-be dearly departed just before they kick off. I wish the cat had more screen time. Soon, though, Dan finds a bigger calling that will take him back to the terrors of his childhood.

Cue Rose the Hat (a terrific Rebecca Ferguson), a vampire-ish woman who is the ringleader of a group of vampire-type lowlifes living in a trailer park who stalk young kids who share the psychic power known as the “Shine.” Once they kidnap a kid and deliver a horrible death, the group gathers round and soak up steam coming from the tyke’s mouth, a life blood for this gang. It happens to a Little Leaguer played by Room’s Jacob Tremblay, and quite frankly it is uncomfortable to watch. In no time, though, Rose the Hat is on the trail of Abra (Kyleigh Curran), a 13-year-old girl with the Shine in such a promising way that her vibe can be felt across the country, sending Rose on the case.

Although still raw with her psychic talents, Abra soon is joined by Dan in the battle against Rose and her cult. This all leads to the film’s best sequence, set at the infamous Overlook Hotel — complete with those creepy girls, the naked lady in the bathtub, and so much more that still haunts us from the Kubrick film. The re-creation of the place and people in a very different era is exceptional thanks to director-writer Mike Flanagan. It is fun stuff to see and saves the film, for me at least.

McGregor gives a solid, believable performance, but it is Ferguson who gets the really juicy scenes and runs with them. My only problem is that endless section of the film comes off as somewhat hackneyed by-the-book horror drivel, not compelling at all and certainly not what Kubrick was able to do when handed King’s imagination. Sorry Stephen. A shining light in the film is newcomer Curran, who looks to have a promising future and plays well with MacGregor.

The film certainly has its moments and top production credits — especially at the Overlook — but wears out its welcome at 2 1/2 hours. Producers are Trevor Macy and Jon Berg. Warner Bros opens it on Friday. Check out my video review with scenes from the film at the link above.

Do you plan to see Doctor Sleep? Let us know what you think.