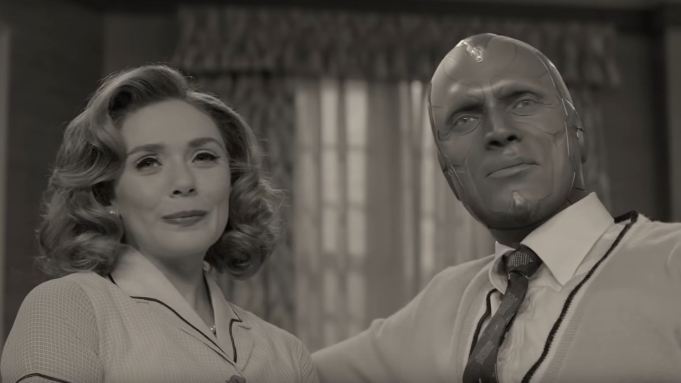 In the latest trailer for Disney+’s WandaVision, the titular characters start off their married life on a high note.

WandaVision, a blend of classic television and the Marvel Cinematic Universe, features the titular characters as they begin to suspect that their suburban lifestyle is not as it seems. In the latest trailer for Marvel Studio’s first Disney+ series, Wanda Maximoff (Elizabeth Olsen) and Vision (Paul Bettany) note that they’re far from the normal married couple.

Superpowers aside, Wanda mourns that she and her husband lack both wedding rings and a unique song. Thus, cue the WandaVision chime created by Frozen songwriting duo Kristen Anderson-Lopez and Robert Lopez.

Reminiscent of chimes hailing from 50s television, the WandaVision theme celebrates the heroes’ new life. However, the cheery tune becomes a haunting one as the trailer features bizarre moments. As the music distorts so do the couple’s various sitcom-inspired environments.

The number continues to build to a crescendo as the titular characters find themselves in even more chaos and confusion about the world around them. The build-up, however, comes to an abrupt stop and the trailer returns to feature the couple at peace.

“And they lived happily ever after,” Vision tells his wife after, the footage briefly goes black.