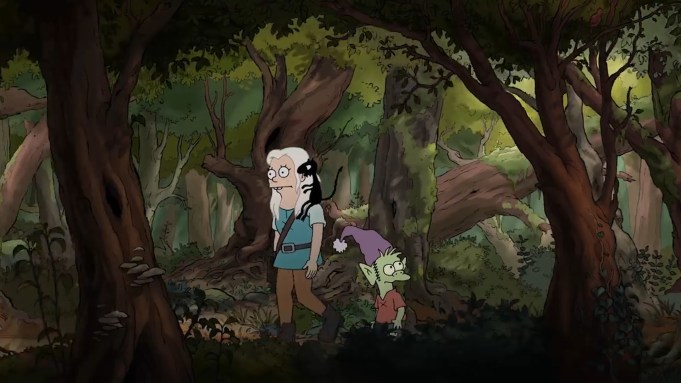 Launching on Netflix on August 17, Disenchantment is Matt Groening’s first new series since 1999’s Futurama, and The Simpsons’ creator latest effort is stuck in the past, literally and figuratively. Despite a strong vocal effort from Broad City’s Abbi Jacobson as the hard-drinking and convention-busting Princess Bean, the animated riff on fairy tale tropes is ultimately a disappointment, as I say in my video review above.

There’s a slew of reasons individually and cumulatively why the Groening- and Josh Weinstein-developed 10-episode first run of Disenchantment doesn’t work, but primarily the medieval-ish series is hobbled by its meandering nature. Unlike The Simpsons, where every episode is its own tightly constructed self-contained unit, Disenchantment attempts to follow a more traditional narrative format of arcs and interlocking stories.

Unfortunately, even with some great graphics from Rough Draft Studios, that ongoing story requirement becomes more an amble than the quest on which the show seeks to take the royal marriage-rejecting Bean. There’s a lot of wordplay and absurdity that will be familiar to any fan of Bart and the Springfield gang, plus the intriguing tones of Nat Faxon and Eric Andre as Bean’s sidekicks — a not so bright elf and gifted (as in wedding present) demon, respectively. Yet, even with some gender- and genre-bending, Disenchantment just doesn’t all hang together – at least for the first round of episodes I’ve seen in this 20-episode order.

Similar to a number of its misfires, this Netflix effort suffers from a marquee name creator — the well-compensating streaming service’s bread and butter — and a fine and funny idea on paper. The execution …well, that’s a whole other longsword and not so sharp.

For more of my take on Disenchantment, click on the video review above. Tell us what you think.