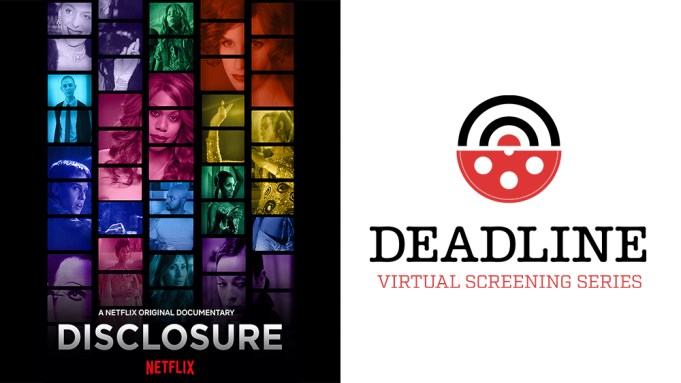 The Netflix documentary Disclosure is chock full of the history of cinema from a very specific point of view, and that is in how we view the whole trans community and all the images we’ve ingested from decades and decades of movies and television that may have influenced the way we think, or don’t think. As times are changing, this look back with expert commentary from those in the trans community is an eye-opener. And that is the whole idea according to director Sam Feder and producer Amy Scholder, who joined me for a fascinating conversation after the film played Monday at Deadline’s Virtual Screening Series.

“I think that’s what was so exciting about using Hollywood film and TV is it’s that this is pretty much a universal experience. It’s this language we all have in common and I think that allows us to bridge certain divides, right? Because I think the most well-intentioned person still doesn’t want to say something wrong, like they might want to talk about trans stuff but they’re scared to offend,” said Feder when I asked why he wanted to tackle the issues surrounding acceptance of trans community and how it may change for the better.

“Now we have this language, you know, via these clips and life experiences of interacting with these clips which watching them now kind of implicates you as a viewer, and to remember how you might’ve reacted then, and also to see how you’re reacting in real time but now know better. You’re like, ‘Oh, I just started to laugh and maybe that’s not OK,’ and but not OK because of respectability politics, but now you understand why it’s not OK because a trans person just shared their personal experience of how it made them feel, right? So when you’re connecting on this visceral level and this emotional level you’re having this change in real time, and it was really important that it wasn’t finger-wagging, right; it wasn’t accusatory, we didn’t want to make anyone feel ashamed. And so having the audience, the spectator, the viewer kind of grow in real time with us was the goal, so that you’d walk away like having that internal dialogue with yourself that can only happen in the movies.”

For Feder personally it was one infamous movie that he saw when he was 15 that started to change everything for him, and essentially led to his being interested in making films that add more clarity and understanding of what the trans community goes through.

“There was this one film that I went to see when I was 15 when a saw a trans person for the first time and that was The Crying Game, and it’s an incredibly beautiful and complicated movie, but there is this one scene where Dil, a trans woman, disrobes in front of her boyfriend for the first time and his reaction is really quick and violent. He strikes her across the face and then he runs to the toilet to throw up in disgust,” recalled Feder. “And I certainly didn’t have the language at that time in my life to understand my gender, but I did not want to be associated with the people I saw on talk shows or with someone whose body invoked vomiting. You know, it really wasn’t until I was 30 years old that I actually met trans people in real life. And I think that very early experience caused this dis-identification or real struggle with how to understand how I relate to the media, how the media informs my life, and how the media tells other people what to think about me. And I was doing photography as a young person, and that was during the AIDS crisis, and I was really starting to understand how stigma was informed and perpetuated through the media, and a few years later I started making films about the trans community. I feel like these ideas have just been percolating for 30 years at this point.”

Scholder pointed out that before making the film they set a few rules for themselves and that included only having trans people as interview subjects so the story could be told from the inside out, and that all those interviewees would be paid for their time — certainly not a common practice in documentary filmmaking.

“We decided that all of our interviewees really are creative consultants (chief among them was Laverne Cox, who also was an executive producer). Our budget was very high for a documentary of this kind, but it was a priority for us, and I can’t tell you how many people told me that it was crazy to try and compensate our interview subjects, but that’s what we felt was fair and we feel very good about that decision,” Scholder said. “It was also very important for us to hire trans key crew whenever possible, because we knew that those were going to be the folks who really were stakeholders in this film and that we could create the right environment on set to get the kinds of interviews, and the intimacy, that Sam was going to get with each subject as we were shooting.”

Check out a select portion of our conversation in the video above. Disclosure is currently streaming on Netflix.