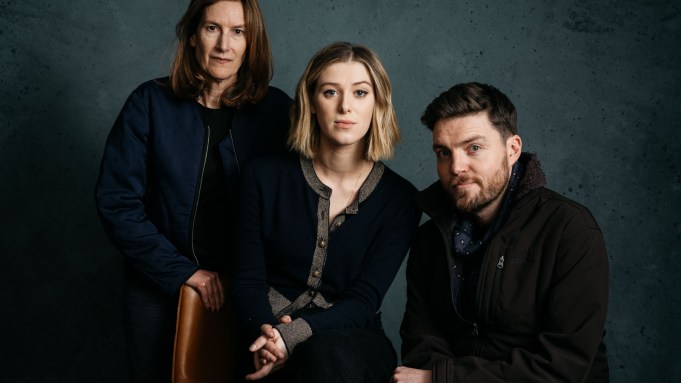 Writer/ director Joanna Hogg is sharing intimate details from her real-life experience in The Souvenir. Set in the 80s, the film stars Honor Swinton Byrne (daughter of actress Tilda Swinton, who also co-stars in the film) as a quiet film student who begins to find her voice as an artist while navigating a turbulent courtship with a charismatic but untrustworthy man (Tom Burke). She defies her protective mother (Swinton) and concerned friends as she slips deeper and deeper into an intense, emotionally fraught relationship that comes dangerously close to destroying her dreams.

“I start out very much mining my own experience and looking back at diaries and thinking about how I felt at the time,” said Hogg speaking about her approach in making this film.

“But then when I start casting and opening out, I become open,” she added during her sit-down alongside Burke at Deadline’s Sundance studio

Hogg and Luke Schiller produced the film while Martin Scorsese, Emma Tillinger Koskoff, Lizzie Francke, Rose Garnett, Andy Starke, and Dave Bishop served as executive producers. A24 has the North American distribution rights to this pic and its forthcoming sequel, The Souvenir – Part 2.

See the rest of the interview above.