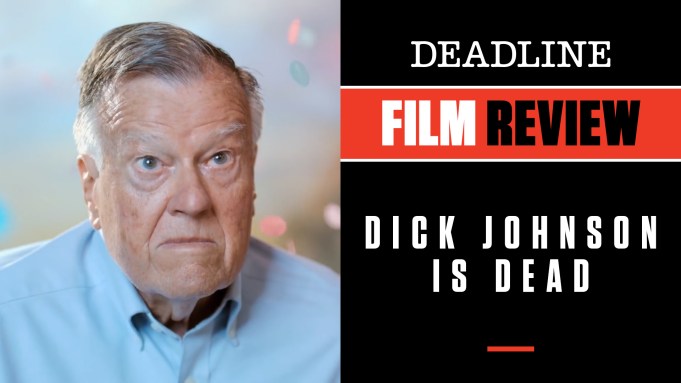 There have been an unusually large amount of documentaries lately dealing in these perilous times with the thin line between life and death, but none of them can compete in that department with the sheer originality and bizarre take filmmaker Kirsten Johnson presents in Dick Johnson Is Dead. The title is provocative enough, but this is not one of those endless docus staged around the murder of someone. Johnson’s film is actually about several often violent deaths all aimed at the same poor soul: her dear old dad. In a novel switch on movies about grief and loss, Johnson has come up with a way to mourn her father’s demise by getting the 86-year-old to participate in a number of grisly endings to his own life. They include everything from falling down the stairs collapsing into a puddle of blood to getting hit Road Runner-style by a heavy object hurled from several stories up. At one point he agrees to be laid out in a narrow coffin where he must play dead.

Play is the operative word here and Kirsten’s dad, a Seattle psychologist named Richard Johnson, is the star of his own movie, one where his daughter puts him through the ringer in some grisly endings, re-creates his own vision of himself in a heaven that looks like it is right out of an old MGM musical, and makes him an active participant in his own tear-drenched funeral. The filmmaker is not up for cheap laughs here (although there are plenty of light moments considering the subject matter), but rather looks for deeper meaning into that gray area between life and our inevitable death. She knows her father, starting to show signs of Dementia, may soon be out of reach, and she devises a way to not only keep him energized and engaged in the here and now but also finds macabre ways to celebrate him.

In an odd way this is a film that has elements of Harold and Maude and Still Alice, among others. It is a twisted documentary to be sure, but one that demands we all face the inevitable as we are watching it unfold.

Johnson spent years chronicling these sunset years of her father’s life, helping him pack up his office and career and then move in with her family. All the while he is also leading the life of a stuntman as it were as he becomes a victim over and over. The director, also a cinematographer, had previously made the lilting Cameraperson, a 2016 docu featuring footage shot around the world on her various assignments, as well as about the all-enveloping Alzheimers of her mother who later would pass away, leaving Dick Johnson behind with only memories that are now beginning to fade. There was a moment I felt a bit uncomfortable watching Johnson put her father through all this, but clearly he was a good sport, and ultimately the experience seemed to be one that was doing a lot of good for him. The title remains ironic, but you will have to see the film in order to find out just how ironic it all is.

A Sundance Film Festival favorite earlier this year, the film debuts for streaming Friday on Netflix. Producers are Katy Chevigny and Marilyn Ness. Check out my video review above with scenes from the film.

Do you plan to see Dick Johnson Is Dead? Let us know what you think.