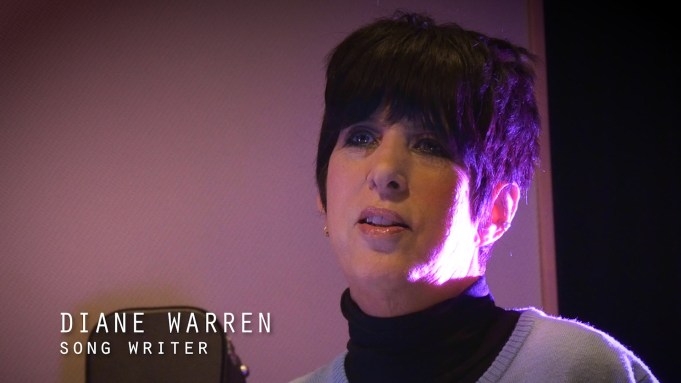 “We’re all born to do something,” songwriter Diane Warren says. “And this is what I was born to do.” Certainly, looking at all Warren has accomplished in her career, the industry agrees.

Amassing nine Oscar nominations between 1988 and 2018, along with a Grammy, an Emmy, a Golden Globe, and three consecutive Billboard Music Awards for Songwriter of the Year, Warren is among Hollywood’s most prolific and impactful musical artists. With nine number-one songs and 32 top 10 songs on the Billboard Hot 100 chart, she made history early in her career, becoming the first songwriter ever to have seven hits, by seven different artists, on Billboard’s singles chart.

Recognized for her work on everything from Mannequin and Armageddon to Pearl Harbor and Beyond the Lights, Warren has written songs for fantastical comedies, romantic dramas, action thrillers, epic period pieces, socially conscious documentaries and more, celebrated with a spot in the Songwriters Hall of Fame and a Hollywood star of her own.

More recently, with her last three Oscar-contending songs, Warren has noticed a trend in her work, as she shifts gears toward projects of social resonance. “I think that’s a really cool change in my writing. There’s nothing more powerful than a song to get a message through,” the songwriter says. “A song just goes right to your heart.”

Her latest effort, “I’ll Fight,” is in the same vein, written for Betsy West and Julie Cohen’s Sundance smash RBG and performed by Jennifer Hudson. One of the year’s most celebrated documentaries, the film examines the groundbreaking and exceptional life of U.S. Supreme Court Justice Ruth Bader Ginsburg, a pop culture icon also celebrated this year with narrative feature On the Basis of Sex, with a track record of defending civil rights, while fighting rigorously for gender equality.

This week’s guest of the Production Value video series, Warren explains what she saw in Ginsburg in watching the film, and how that translated into her empowering song. “When you see the documentary, you see that her mom told her, ‘Don’t raise your voice in an argument.’ [So] she doesn’t raise her voice, but her voice is loud, and she’s been a fighter,”  she explains. “I wanted to capture that.”

For Warren, writing a hit song—or a song that will resonate with a large audience—comes down to sitting down at the piano, or with her guitar, and putting in the work. “In all honesty, I kind of do what I’ve been doing since I was like 14. I just show up, whether it was a shed in the back of my mom and dad’s house that they made me go to because they couldn’t stand to listen to me playing the same song over and over again for five hours, or working here,” she reflects. “It’s actually just sitting down and coming up with something that I love.”

Busy as ever this past year, Warren also contributed a song to Bradley Cooper’s A Star is Born, reteaming with Lady Gaga following their Oscar-nominated work on The Hunting Ground. Though people familiar with Warren’s artistry have assumed she wrote the film’s key ballads, her contribution in this case was something entirely different. Performed by Gaga’s Ally, a singer on the rise making her Saturday Night Live debut, the song contains the memorable lyric “Why’d you come around here with an ass like that?,” which sprang from Warren’s mind.

“Gaga goes, ‘I’m pulling you out of your comfort zone. I’m going to make you write to a track.’ Because usually, I write by myself,” the songwriter shares with a smile. “We smoked a joint together, which made it easier.”

While A Star is Born has been a major critical and commercial hit, Warren wasn’t surprised by that result. Featuring two of the biggest stars on the planet—one making his directorial debut, and one breaking through with a powerhouse film performance—the film’s success seemed all but assured. What was surprising, for Warren, was the degree to which RBG overperformed—passing the $14 million mark, domestically—which just speaks to Ginsburg’s cachet in the world today. “What do documentaries do, like $200,000 maybe? If they make a million, it’s huge. People want to be uplifted and inspired, and when you see RBG—and hopefully, when you hear my song—you want to fight, you want to stand up for your rights and be thankful there’s people like Ruth Bader Ginsburg in the world,” Warren says. “And long may she live.”

For more from our conversation with the songwriter, take a look above.