'Supernatural' Prequel 'The Winchesters' In Works At the CW From Jensen & Danneel Ackles
Read the full story
June 10, 2021 2:40pm 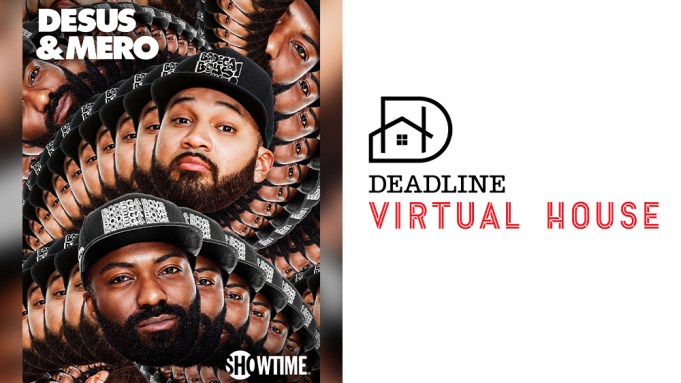 Desus & Mero have been making noise in late-night over the last few years, starting at Complex before moving to MTV2 and then Vice before settling in on Showtime, where their eponymous show is currently in its third season.

The pair call this process “levelling up” and they’ve certainly got their footing, having now produced close to 500 episodes of television and over 200 episodes of their podcast.

“After Complex, we found our footing, and we realized this was something,” The Kid Mero tells Deadline’s Virtual House. “We pivoted from audio to video so fast without us knowing and people really fuck with this. That was the spark and every step of the way you get a stronger foothold in the industry. Every step of the way has built up the confidence to the way we are now.”

Desus Nice adds that Complex was the pair’s rookie year. “Maybe we didn’t know how to move on the court but now we’ve been doing it so long, there’s a muscle memory and we’ve got the jab step and the dunk,” he adds. “It’s levelling up; each place we were at prepared us for where we are now, if we didn’t have Complex we wouldn’t have MTV, if we didn’t have MTV, we wouldn’t know how to Vice and all that. Everything we did before led us to where we are now.”

The pair are now at a point where over the last 15 months they have interviewed a number of super illustrious guests including President Joe Biden, Dr. Anthony Fauci and President Barack Obama.

Desus adds that Obama was super comfortable and the jokes flowed. “At no time did it feel like we were interviewing the President, it felt like Uncle Barry, it felt like one of our boys who has a really important federal job.”

Mero notes that in the world of “big gets” in late-night, Obama is the biggest, “especially at that time with the political climate”.

The interview also brought the show a few new fans. “Any clip that Obama does goes viral, you start seeing on the timeline people didn’t even know us. You start seeing comments under our Instagram. If you get Obama on you’re going to attract eyeballs that never heard of you and never knew the show and know are going to come in to watch the show,” adds Desus.

The pair have spent much of the pandemic shooting their show remotely from their homes – Desus in front of his sneaker wall and Mero in his basement away from his children. But they have arguably been some of the late-night hosts most comfortable with the change. “It’s like riding a bike, even though the times change and we’re no longer in the studio because of Covid, it’s the same Desus & Mero energy that you see on the show. Not to say they just put us in front of the camera and we perform, that’s our natural element and energy and we’re still enjoying it.”

“I feel it would not be fun if we were classically trained and this was a job. It’s just our natural thing that comes out of us. If you just put us in a holding cell, you’d get a great late-night show. A little darker, same vibe,” jokes Mero.

The prison spin-off may not take hold, but Desus says it’s just their nature. “It’s very similar to when we started our podcast. We’d get the train home together and people would overhear us and say we should have a show. If we weren’t doing this on camera, if no one had discovered us, we’d probably be doing this in a bodega and asking for change, so thankfully life took us in the right direction.”

Life definitely took them in the right direction and the pair are also able to return to their own studio, one that they bought just before the pandemic, on June 20 with Lil Nas X as their first guest. It will mark the next chapter for the pair, who have been causing enough noise that some believe their Jax Media-produced show can smash their way into the Emmy late-night conversation.